Rolling Loud, the largest hip-hop festival in the world, is set to make its Canadian debut in Toronto. The three-day event will take place from September 9 – 11 at Ontario Place – located on the shores of Lake Ontario overlooking the Toronto skyline.

Artists Dave, Future, and Wizkid are set to headline the festival. The lineup also includes several hip-hop heavyweights such as Lil Uzi Vert, A Boogie wit da Hoodie, Rae Sremmurd, Central Cee, Roddy Ricch, Skepta, Trippie Redd, Don Toliver, Lil Yachty, Migos, Nav, Ski Mask the Slump God, Lil Tecca, Belly, AJ Tracey, and Fivio Foreign. On top of these artists, Rolling Loud also made sure to include up-and-coming Canadian talent in their lineup by including homegrown artists such as Roy Wood$, Smiley, Baka Not Nice, FRVRFRIDAY, Dom Vallie, and DJ Charlie B. Ultimately, there are over 85 hip-hop acts that will be performing at this festival across the three days on three stages. 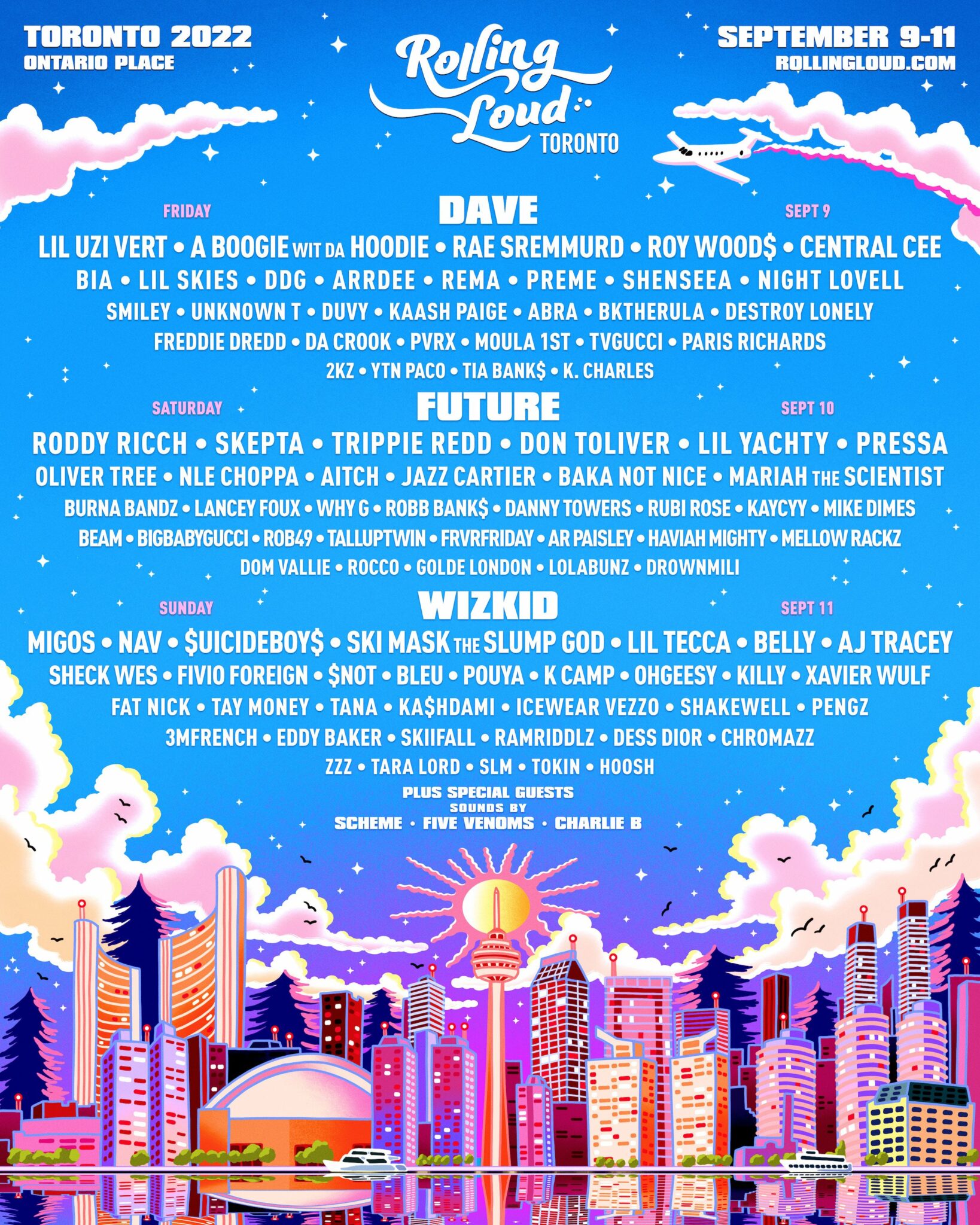 Being founded by five-time Billboard Hip-Hop Power Players Matt Zingler and Tariq Cherif as a Miami event – and now taking place annually in multiple countries – Rolling Loud has evolved into a global phenomenon and staple for hip-hop music. Over the years, the festival has received extensive critical praise:

“From niche hip-hop festival to must-play event for some of the biggest stars in music.” – Pollstar

“Until Elon Musk involuntarily envelops society into a physical cloud universe, Rolling Loud will be the closest experience to actually living inside your streaming app.” – Complex

“Rolling Loud is a lifestyle brand. They are more than just the shows. They have built a community with their consumers and are building new channels to maintain continuity” – Forbes

“In four and a half years — beginning small in Miami, and now promoting Coachella-sized events around the country — Rolling Loud has established itself as a playground for the young…This time last year, many of the rappers now drawing crowds of several thousand were barely known.” – The New York Times]

Ultimately, the weekend of September 9 to September 11 will go down as one of the most significant weekends for hip-hop music in Canada. Find more information about Rolling Loud Toronto here. Purchase tickets for the festival here. Keep posted with festival updates on their Facebook, Twitter, Instagram, and Twitch.

ADDICTED will be covering Rolling Loud Toronto so stay tuned for weekend-long coverage of the festival, right here and on ADDICTED’s Instagram.