For the past 2 weeks, every day I have cried for Sarah Hegazi.

Sarah Hegazi was an Egyptian activist who rose to prominence for the viral photo at the top of this page. Sarah was at a concert with her best friend. The band was Mashrou’ Leila, a Lebanese band with an openly gay member, a controversial and newsworthy thing in the middle east. While perched atop a friend’s shoulders, Sarah held the rainbow flag, the universal symbol of gay pride, aloft. That joyous act of free expression set off a chain of events that lead to her persecution, her imprisonment, and her subsequent escape from Egypt and its authoritarian regime. And why was she subjected to such treatment?

Because Sarah was gay. I say was, because earlier this month, Sarah took her own life, and this Monday she was laid to rest right here in Toronto. She was 30 years old.

I’m not sure why her death has hit me so hard. I didn’t know Sarah, and truthfully I only learned of her through this tweet from Egyptian feminist writer and activist Mona Eltahawy. But once her story came to my attention, I could not let it go. I guess I felt a connection to her, one that went beyond our shared Egyptian heritage, relative age and gender. Like me she was a feminist, who believed that everyone should be treated equally no matter their birth, background, or economic status, though she took her activism and her ideology to levels beyond my own. The more I read and learned, the more it upset me to see this intelligent, multifaceted and inspiring human targeted and destroyed simply for being who she was. Because she was a person who deserved to live, to succeed, and to love.  But most of all, she was a human being with inalienable rights, despite what Egypt’s government, and so many of its people, want you to believe.

Egypt and Canada are very different places, especially when it comes to human rights, freedom and sexual liberation. While homosexuality isn’t technically illegal, it’s considered a moral crime at the very least, and authorities will use charges such as “debauchery” or “promoting sexual deviancy” to punish those who are simply being their true selves. Call it regressive, call it bigotry, call it lack of awareness; no matter how you label it, this impediment to open-mindedness is made all the more acute because of the very nature of the Egyptian. The Egyptian is passionate, full of life and energy, feeling nothing by halves.  There’s a reason why so much incredible art, music and middle eastern pop culture came from that country.  But just as he can be full of joy, happiness, and laughter, so can he be brutal, with a legendary temper, cruel and so very ignorant. And I say he because at its core Egypt is a deeply patriarchal society, one stuck in the past, held back by authoritarianism and its foot soldiers misogyny, homophobia and a deep seated unwillingness to change. These factors all combined to make the violence against Sarah, physical, emotional, verbal, virtual, all the more intense, and all the more devastating (as Sarah shares here in her own words).  It’s what makes it so clear that if Sarah had had the chance to be born and raised in Canada, like me, she would still be here today.

But she wasn’t. I was. And I’ve never felt that privilege more acutely than these past 2 weeks.  And it wouldn’t be 2020 if this didn’t have at least a small lesson in privilege.

I’ve been to a Mashrou’ Leila concert. I’ve sung along to their beautiful songs. I’ve been to many concerts, with my best friend, who, like Sarah’s, just happens to be a gay man. I’ve attended countless Pride festivities and parades without fear of reprisal. I’ve even had conversations about Pride and the Pride parade in the workplace freely and safely. Hell, I even had an old boss ask for tips to navigate the Church Street village. He, a white man in his 50s or so, was planning to attend with his wife and wanted to know what to expect. The free, open and honest conversation that followed ended in me wishing him a fun time. Had I been in Sarah’s shoes, that conversation would have resulted in my firing, and worse, a piece of evidence filed away to be used by a corrupt system intent on stifling all expressions of individuality and freedom of spirit, in an effort to cling to power.

It was the Egyptian state’s goal to dehumanize Sarah, to make an example of her to other’s like her. They worked to strip her of her humanity, with their violence, with their torture, with their abuse. When she was finally able to flee their clutches they used their propaganda. And now that she is gone, they use their hate, and their threats. So deep runs that hate, that ignorance, that misogyny that even with her death they persist.

By the grace of god and geography, Sarah wound up sitting in an Egyptian jail for one of the innumerable crimes they invent against those who dare to think, love, be and dream differently than the status quo. And I have to wonder, if I were born in Cairo, with my big mouth, my loud personality, my desire for justice, freedom and equality for all, my belief that people should be free to love and be who they are, could I have ended up like Sarah? Would I had even developed those qualities in that environment? I marvel at the strength it must have taken, in the face of such fear, for Sarah to live her truth. A truth for which she was so gravely, so unjustly punished, left with scars so deep they could never heal just as they could never be seen until it was too late.

Instead, I sit here in my apartment in downtown Toronto, shedding tears and writing this tribute to someone I’ve never met.

This year, I lamented the cancellation of Toronto’s Pride celebrations because of COVID-19. It’s a tradition after all, for my best friend and me to walk up to the Village, roam the closed streets, smoke weed and people watch, before capping it off with a cocktail at Boutique Bar, now that we’re too old to go to Crews and Tango. Now, I lament that Sarah never had that experience, not with the same freedom and joy I have. The freedom I had to be who I am, to embrace my independence, and to celebrate the differences of those around me, instead of suffering immeasurable pain.

There is a shining light in all of this darkness however, and Sarah would be happy to learn that it comes in the form of love. Both in life and now in death, Sarah’s story has touched so many. Within Egypt, and other parts of the Middle East, there are those who are full of hope, those who wish for change, and those who can love and care for each other so very deeply, even when their own government is telling them not to. From the many articles, blog entries and social media posts flooding the internet in tribute to the fallen activist, to the heartfelt messages of homage Sara’s friends sent from Egypt to be included in her memorial event; the common thread was love. Those beautiful messages of earnest love and strength, even in the face of such loss, gave me hope. There are those in Egypt who are ready for a more open, inclusive and loving society. They just need help from people like us to keep their spirits strong and to support their long battle in the face of ignorance and hate.

And Sarah herself had hope, even in the depths of her despair. She once wrote, “The world will only change through love. No matter how much they hate me or hate people like me, no matter how much they hate anyone who’s different, still the only thing that will change the world is love and coexistence.” And in the end, her wish was that her story could help others like her, by raising awareness for the plight of the queer community in Egypt. For there are so many more people like her back there, whether they are wrongfully imprisoned by the state, or living every day in fear of hate fueled retaliation. And it’s only with love and openness that they can someday be free.

I’ve had this irrational idea that if I had known Sarah, I could have helped her. I see the hubris and ego in this; who am I that I could have made the difference to someone in such pain, who had suffered such anguish. But I feel it still, and it’s hard to ignore. So by writing these words, by sharing Sarah’s story, and by telling those of you like Sarah that you are beautiful, that you are loved and that you are so worthy, no matter what a government, a human being, or the hurt inside you tries to tell you. The world is horribly unfair and we are working so hard to change that because you deserve to be happy, safe and free to be who you are and love how you love.

The Egyptian government tried their best to destroy Sarah’s humanity. In the end, it was not Sarah that they succeeded in dehumanizing, but themselves. Despite their best efforts, it is them that are scorned and derided, as the world rejoices in Sarah’s life. So today, when the streets of Toronto would have shut down to celebrate Pride and the freedom to love, and to be, we strive to honor her memory with growth and change.

Dear Sarah, may you rest in peace, in power, and in pride. 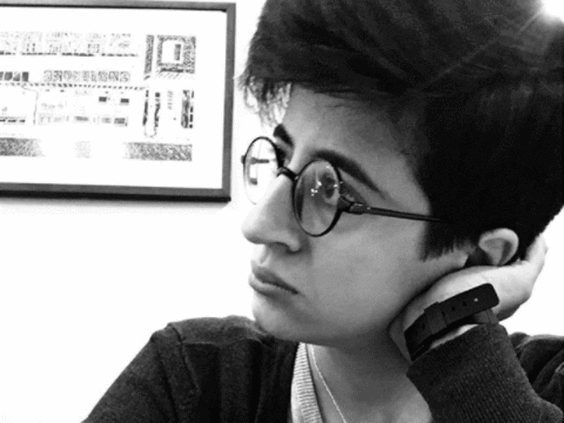 To support others like Sarah, follow these Egyptian LGBTQ Organizations and donate to them when they are able to receive funds:

You can also support the Rainbow Railroad , an organization that helps LGBT individuals from less accepting countries claim asylum in Canada and the U.S.