Through a bit of research, his story reveals a self-proclaimed “enigmatic” musician whose robust and international career has run roughly 40-years.

Raised around the world, Sluka is not shy about name-dropping, either. 1980’s pop icons such as Tears For Fears, INXS, Talk Talk, Simple Minds, and Cat Gray (who worked extensively with Prince), all of which he purportedly “found himself in the same melting pot” as during his formative New York years.

Serious credentials, and it’s all impressive to be sure. But what about Sluka’s actual music?

On “Figure It Out” (a heaping slab of genre-blurring, progressive histrionics) the word “adventurous” is perhaps an understatement. 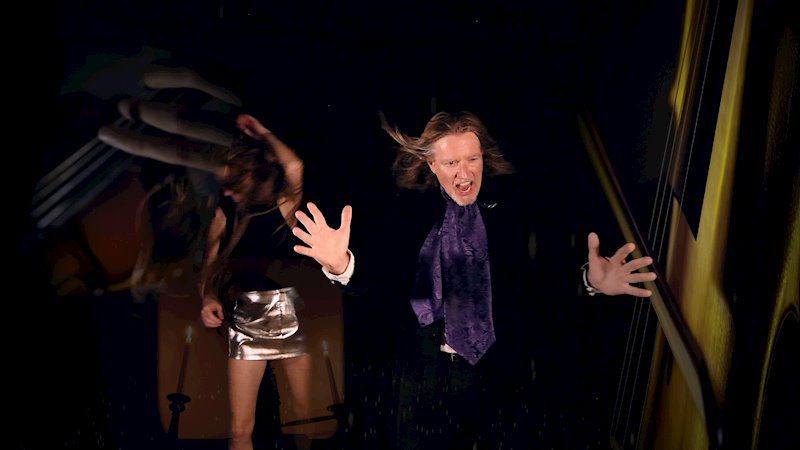 Still from Sluka’s music video for “Figure It Out”

Clocking in at just over four minutes, the song erupts as an unashamed pocket symphony, spanning passages of muscular strings, brass, and percussion with interludes of melodic piano. However, the result often sounds like double-exposed film: full of incongruous shapes that overlap at uncalculated angles.

Despite these grievances, Sluka is no weepy miserabilist. Gifted with a voice that soars high above the rafters, the lyrical simplicity of “Figure It Out” is set anew by his buoyant, fearless passion.

It’s a peculiar performance. It’s also strangely addictive, with subsequent listens promising to shed light on who Sluka is and where he came from. Truthfully, to make music like “Figure It Out” in 2021 is not only commendable, it’s practically extinct. There’s a mystique about him, so why ruin the fun by solving it?

More about Sluka in the links below