As a kid of the 80s, I longed for a digital watch. When I was finally gifted one, like many others of that era, it was a Casio. I think it was an F-86. It had an LCD display, a plastic band and three buttons. My Casio also had a dim light that allowed me to just read the display in the dark. To anyone born after 1990, that sounds snoozingly pedestrian but back in 1980-something, it felt like I was handed a key to the future.

Long before that supercomputer in your pocket could do everything from being your therapist to showing movies, your watch was IT.
It told you the time, it reminded you to wake up or take your bread out of the oven. It recorded the time of your best circuit around the track and it told you the day and date. Along with a pen and a page of lined paper, there was your personal organizer. If you were a scuba diver, it was an integral part of not dying in the deep. What set your watch apart from any other device was how much effort and design went into its creation. Not just its operation, but its outward design as well. A watch whether it’s a dollar store plastic job covered in Paw Patrol characters or a million-dollar masterpiece with a hand-painted dial (the horological term for the face of the watch under the glass (crystal)) human-assembled over a six-month period from precious metals, does the same thing. However, how it tells you that time as well as how it looks is where a spiralling earth-core depth of history, design and understanding lies. This is where my true fascination for wristwatches was recently found. I know a fraction of a percent about how a watch works and only slightly more about the rest of all the categories of horological understanding. This is where this column finds me – having taken but a few first steps into edification so shallow that I don’t even yet entirely know what I don’t know. My intention is to bring you readers with more or less knowledge than I possess along for the ride as I educate myself on the history, the brands, the mechanics, the styles, functions, materials, culture, appearance and construction of watches. One of the first deep watch things I learned was the importance of nuance. Yes, a sweet-looking white dial chronograph knocked off from the original Rolex Daytona looks like the real thing, but what’s under the hood (backplate in wristwatch terminology) isn’t the only determiner of difference. I’m years from possessing the slightest at-a-glance watch (or reference number) knowledge but I do know that obscure finishes and details like the markings on a dial (indexes or indices) or the texture of the case matter in dramatic ways. This is daunting to the newbie, but these seemingly trivial nuances are what I LOVE about a newly-acquired fascination.

My personal watch story continues with some sort of crappy game watch a few years after the Casio was forgotten. Yet, I can’t even remember which games could be played on it much less the reference number. I can only assume that it actually told the time. I have a feeling it didn’t last too long. What attracted me to this watch was how much technology was packed into this plastic thing on my wrist. Technology was the wedge that placed watches in my mind and not from lousy 1-bit watch games. It was an introduction that I think many people shared. And that was Commander James Bond. Though the Bond films of the 80s were the campiest of the series, there’s no doubt that whatever Seiko paid to have their watches in The Spy Who Loved Me, Moonraker and For Your Eyes Only paid off in multiples as fans longed to possess the spy’s watches selected by his Quartermaster. My first Seiko didn’t explode, have a microphone or a tracker, but I was pretty amazed that it had an automatic winder. The reason I bought that 5 Automatic 20 odd years ago was because of how much I loved the look of the Pro Diver that Roger Moore wore in For Your Eyes Only. (Michael Stockton wrote a definitive and deep (oof, bad diver pun) piece about this particular watch over at the esteemed watch blog, Fratello. The header photo is also his. Thanks, Mike!) Priced at around $2,500 USD today, I’m likely going to continue to look at pictures of that Bond Seiko online rather than see it on my wrist. While I would love to wear that one (and many, many more), my interest in them isn’t something I will break the bank over. Don’t get me wrong, I appreciate the value of watches that are beyond what I am willing to pay. I also respect watches that are out of grasp for all but the 1%. A master-crafted timepiece at that level is beyond just a watch, it’s a piece of art. And like a Monet or Matisse – I’m lucky to see one in front of my face in a gallery but more likely to spend in the low hundreds on a print. 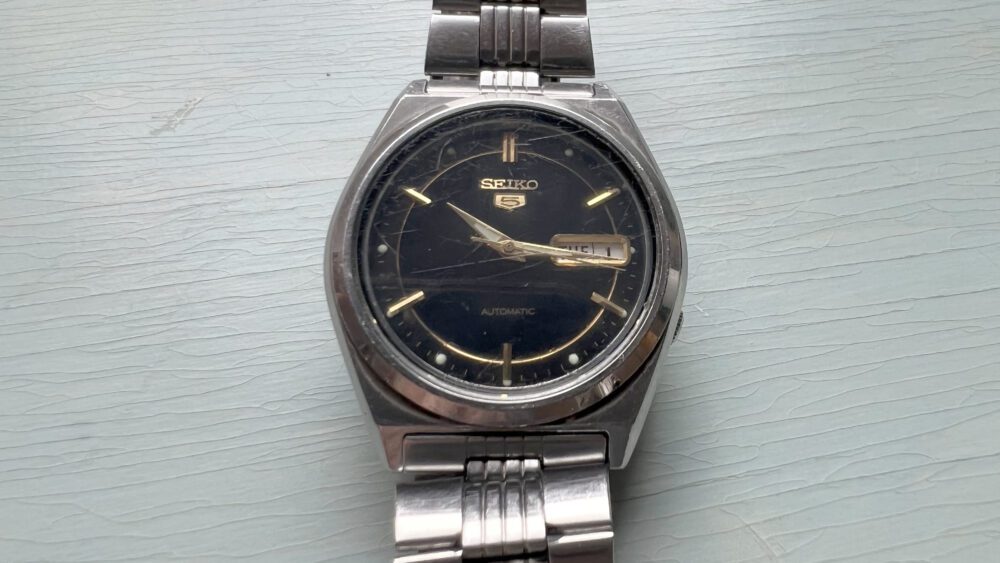 One thing the wannabe watch collector first slams against is the cost. Even the disinterested know that a Rolex watch costs as much as one or a fleet of Toyota Camry (for this use, I will leave this spelling as its plural). The varying price is indeed car-similar with used entry models costing very approximately at around $10,000 and heading upwards into the hundreds of thousands of dollars. Rolex, along with Patek Phillipe and Audemars Piguet has been elevated beyond being mere or mighty timepieces or luxury items. Many collectors view them as investments with ballooning gains that outperform any stock or commodity. I do wonder how many of these types of collectors actually admire their investments on their wrists and outside of a safe deposit box. I ask that because 99% of my interest in wristwatches has to do with how they look and feel above how they rise in the resale market. I care most how a watch looks on my wrist. I’m not what most would consider a fashion-forward man but I do have a personal style. I like a combination of form and function with the latter being of greater personal value. I like technical styles that lean minimal. I like neutral colours over patterns but love industrial textures. I like durable design that is well constructed with an aim for long life. I like resembling a kitted-out hiker when I’m walking to the store to grab milk. And yes, like a good Gen X urban hipster dad, I do own more than one pocket knife.

The good news, and a not-insignificant reason for this column, is that among the aforementioned ‘grail’ brands of wearable timepieces, there are many more companies producing quality watches that hover in the range of hundreds of dollars (like a nice art print). These microbrands design and sell watches of every variety. Many may resemble famous models like the Daytona, Patek Phillipe Nautilus or the Audemars Piguet Royal Oak. But many others freely branch out with fantastic original designs in offbeat dial and strap colours. These are what I will focus on in this column because they are the most accessible way to enter the collector community and learn about watches. As I said before, watches broken down into their non-mechanical parts and basic functions are almost identical. What rivets me is how all of them, from Timex to A. Lange & Sohne, are differentiated otherwise. The most direct answer to this question is the movement or caliber; the sprockety guts that go tick, but I intend to learn more than the basic answers, hence the column name. And what knowledge I gain, I will share here with anyone interested enough to read what I write. My plan for Watch and Learn is to write about my personal experiences, delve into some cool history, provide some basic technical info about watches and introduce brands that offer affordable watches to us non-investing collectors with disposable wealth in the hundreds of dollars.

While even basic horologists somehow can easily have a collection worth six figures, those of us who spend three figures on watches don’t have the same security concerns. While I treat my paltry watch collection like they’re made of spun sugar, I know that I can have a replacement shipped to me overnight without much concern or cost. However, even if I was of the gentry who drives a different supercar each day of the week, I’d still be paranoid wearing a million dollars of ‘one of two hundred’ wristwatch out and about. So, the natural method for me to collect isn’t to hunt for a white whale but to search an ocean full of goldfish for something special. After all, goldfish may be common and plentiful but they’re still very pretty.

That wraps the very first post of Watch and Learn. I hope you enjoyed it but please don’t leave me cheerleading watches in a dark lonely room. I really want to interact with everyone interested in watches; from beginners like me to seasoned collectors to watchmakers. To ensure I put my foot in my mouth early in the exploration and reporting, I am going to try my hand at teaching a bit of horological terminology in the next article so we all know our crystals from our bezels. And I promise it’ll be shorter than this one and contain more pictures.
Keep on ticking.