In 2015, big mountain freeskiers Jérémie Heitz and Sam Anthamatten conquered some of the most iconic mountain peaks in the Swiss Alps for a documentary entitled La Liste. Fast forward a few years and both men are back for its thrilling sequel spanning the Peruvian Andes to Pakistan’s the Karakoram in La Liste: Everything or Nothing.

Helmed by Canadian filmmaker Eric Crosland, the documentary’s scope is more grandiose than its predecessor while being more intimate. Thanks to his formative years spent in-and-around the Alberta Rockies, Crosland brings a keen understanding to the breathtaking, heart-stopping panoramas by considering the thrill-seekers who attempt such great heights – namely Jérémie Heitz and Sam Anthamatten

ADDICTED‘s Myles Herod had the chance to talk to Eric Crosland discussing his new film and what it took to capture such death-defying footage that was deemed “un-skiable” by many.

ADDICTED: La Liste: Everything or Nothing tells the story of big mountain skiers Sam Anthamatten and Jérémie Heitz. It’s also a sequel of sorts to the 2015 documentary entitled La Liste which also followed their freeskiing adventures. What made you want to make this film?

Eric: I had gotten a note from Sam [Anthamatten] about the project and worked with him on previous expeditions. I really wanted to see these remote mountain ranges and if they were skiable and was just intrigued by the adventure. I had seen La Liste and loved Jeremie’s skiing and thought the combination of characters could make an interesting documentary.

Watching the film, I was reminded of other documentaries such as The Man Who Skied Down Everest and Free Solo. What logistical preparations did you have to map out before, and during, the making of a film with such high stakes involved?

Eric: We did a lot of prep work on Google Earth, old maps, deep-dive photo searches, etc.  That said, our best info came from just talking to other mountaineers that had travelled in these areas to see when the snowpack was at its best. Snowpack on these higher mountain ranges above 6000m can really only hold skiable snow for a few days a year. In other words, our timing was super important. Working with our local fixers and contacts was also huge. They would go out, scout, and send us pictures. As far as avalanche conditions, you have to pinpoint the best window and just go for it because it can change instantly. Because all these mountain ranges in the documentary are so close to the equator, once the sun comes out on the slope, it can destroy the snow in minutes. 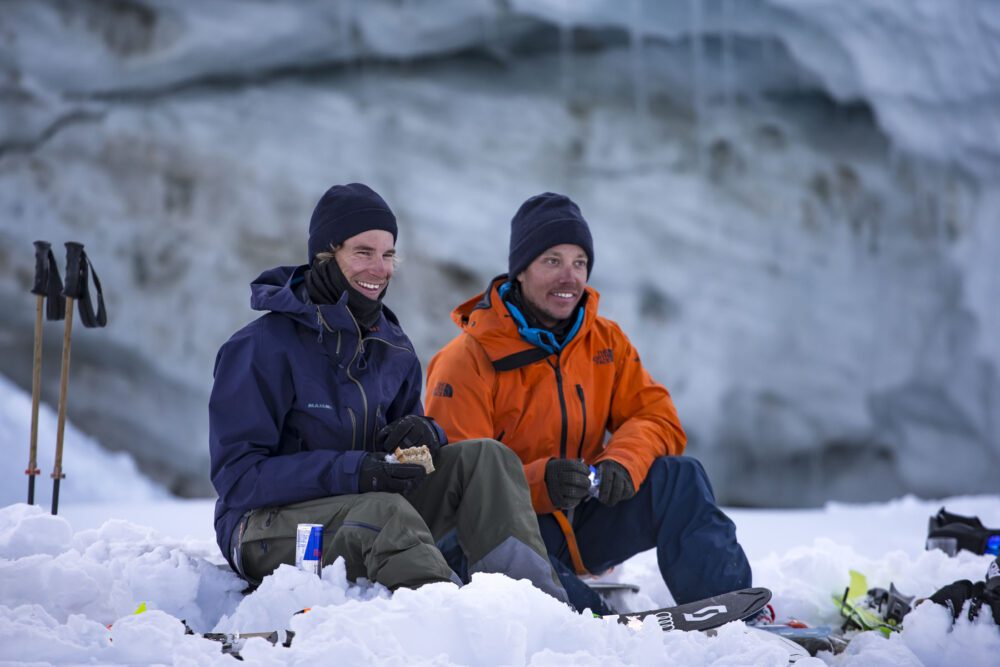 Tell me about the film’s drone camera operators. When Sam Anthamatten and Jérémie Heitz are skiing down those treacherous mountains in Peru and Pakistan, theoretically there’s only one chance to capture the footage. How many operators did you have rolling at those given moments and how often was the captured footage usable?

Eric: Our drone teams were crucial. We would have multiple drones in the air for most of the descents, and we also learned from our mistakes as each expedition went forward. For the DGI drones, they come locked, so they can only fly 500 m above the operator. The mountains we captured were so big that 500m doesn’t get you to the top so we had to hack into the software so we could fly thousands of feet above the controller. We would have one bigger drone as the master angle and then use smaller drones as backup angles or cutaways.

Tell me about your background as a filmmaker. How did it come about?

Eric: My filmmaking is linked directly to my passion for mountains and adventure. I grew up in the Canadian Rockies in Alberta and was inspired by those mountains at an early age. I went to film school but really learned from shooting with different people on different jobs and that lead me to a wide range of projects over my life so far.

Having photographed such incredible images for the movie, I’d imagine the payoff sometimes doesn’t always equal the risk involved. What piece of advice would you give to aspiring filmmakers looking to make documentaries of a similar ilk?

Eric: My advice to people looking to shoot aggressive skiing is to expect the unexpected, or expect really bad conditions. The amount of patience needed is hard to grasp. That being said, remember to have fun while you’re there and not put too much pressure on yourself that you can’t enjoy the experience.

There’s a harrowing moment in the film where a photographer on the expedition named Mika nearly dies, hurting his back and puncturing his lung, amongst other injuries. The scene has divided people online, with some calling it exploitative. I tend to disagree, finding it instead shows the real danger and risk involved with documenting such extreme sports. What made you keep it in the final cut?

Eric: We kept the scene in the movie for several reasons. It was on the first expedition and was extremely traumatizing for Jeremy and Sam and the film crew. It ultimately affected Sam and Jeremy’s decision-making on the rest of the expeditions. That incident changed Jeremy‘s life forever, so we needed to keep it in so people can understand the reason for his behaviour later on in the film. See, this is a documentary. If we took it out of the film, it wouldn’t be truthful. We needed to show everything that affected the characters and how they changed throughout.

Daunting and iconic peaks captured by Eric Crosland and his team

What has been Sam Anthamatten and Jérémie Heitz’s thoughts on the completed film?

Eric: I’m not 100% sure what their true feelings are on the film. I imagine they probably would’ve liked some stuff to go differently but they should be proud of what they accomplished and happy they survived all those journeys. It’s an intimidating thing, putting yourself out there for the world to see, and the projects never turn out the way you imagine them to. So, I’m sure it is bittersweet.

With technology such as drones and Go-Pros opening up the way documentaries like this are being made, where do you see the future of films like this one going?

Eric: I think smaller and lighter cameras are really helping people go further, faster, and get to new places. The future of these films is finding the interesting characters that can open up to a film crew. They also need to be lucky with timing accompanying these people in life-changing moments. I think you can still have all the best technology in the world, but you still need to be able to tell a story. That will always be the hardest part, and will always be the future of filmmaking.