The ’80s movies always seem to have that kind of flair going on – the sort of elegance that is different from what we have nowadays. No matter if a particular movie became a hit or it just fell into the underground, we could not help but appreciate the appeal that the business outfits had in that specific time.

You want to look like in the ’80s while still appearing trendy. So, what can you wear to a business meeting? It would be best if you seemed to be stylish – yet a plain modern suit does not suit your fancy. Here are some ideas that are generally recurrent in old movies from the ’80s.

No matter if you were a man or a woman, the ’80s were all about trench coats. They were elegant yet slightly casual, and they also featured a certain mysterious vibe that told others you had everything together. Your life may be chaos, and the panic might be going overboard – but at least the trench coat will make you seem cool and well-put-together.

Oversized clothing has been around for a while. We all have our fair share of large hoodies, oversized T-shirts, and even oversized sweatpants. Nowadays, our suits are on-point, cut to fit our size precisely. However, in the ’80s, business suits were slightly oversized, made with broad shoulders. This is why every man in a meeting would seem bigger and more imposing – because their suit allowed them to show off as the big guys.

Frilly, voluminous clothes (particularly around the arms and chest) were all the rage in the ’80s – particularly for the ladies. It made them seem more respectable – and took out that “I’m fragile” vibe most of them tended to give off.

That being said, while usual outfits allowed them to “puff out” their clothing in a crazier manner, business attire asked for them to tone it down. However, a couple of frills around the bust or some slightly puffed shoulders is what made the ladies in the movies blast with confidence.

In the ’80s, not everyone would wear a shirt with their suit. Plus, since the decade was still somewhat rebellious in its general style, you would always see something slightly crazy in the outfits. To make their business outfits seem official, yet slightly casual, actors in Hollywood movies would be generally seen wearing a turtleneck underneath the suit.

Aside from the benefit of fashion, these outfits would also keep them warm. Plus, since it was part of their essential wardrobe, this piece would not be hard to find. 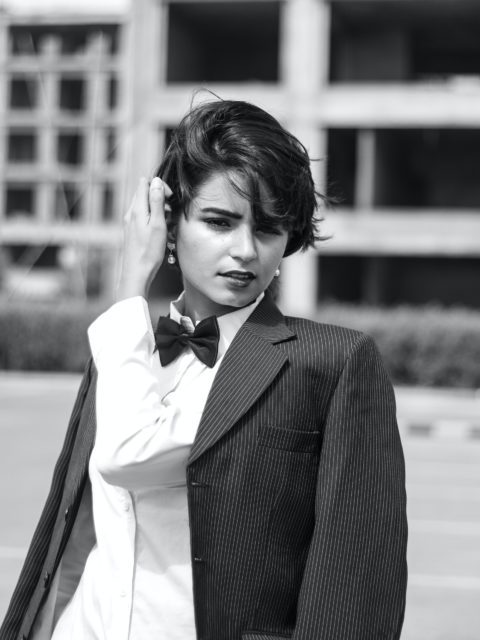 No matter what ’80s movie you are looking at, you are bound to see someone wearing a bow tie to a business meeting. It had a fresher look in comparison to the regular tie, and both men and women would wear it with their shirts.

The ladies loved bow ties, but their popularity was highest with men, as the ladies still preferred going on the more feminine route. If their business outfit included a shirt, a bow tie was an excellent and elegant addition to it.

Have you noticed how everyone in an ’80s movie would wear high-waisted trousers? For a good while, low-waist or medium-waist pants were the go-to – but back then, the higher it was, the better. Tucked shirt, open jacket, and a slim belt to keep the pants in their place – this is what we would see on every hip character from an ’80s movie. Add to that a nice ’80s themed hairstyle, and you will have the same casual yet elegant vibe that seems to be recurring in the old movies.

Nothing made more of a statement than a pinstripe suit. This type of suit was generally worn at the workplace – but in comparison to the plain pattern, this had a bit more flair. It was the preferred option for those who wanted to ditch the monochrome pattern of formal wear – but did not want to seem too casual. Every successful businessperson or “rich man” in the ’80s movies would be wearing a suit featuring vertical lines.

In the ’80s, the world was all about perfumes. Flowery scents were all the rage – the sunnier, the better. However, if you were going into a business meeting, you were expected to smell good – but professional. This is why in the ’80s, brands such as Dior, Calvin Klein, Drakkar, and Estee Lauder were among the most popular. Nowadays, just smelling them would take you back to that decade. However, each person is different in terms of perfume, which is why it would not hurt to check out a perfume guide. This way, you’ll find out what ’80s perfume would suit you the most.

Suspenders are occasionally worn nowadays to compliment a casual outfit. However, in the ’80s, it was all a part of your average business getup. Not only would the suspenders keep your pants in check and prevent them from sliding down, but it would also make you look charming and elegant. Picture every movie character from the ’80s, confidently owning the room while their suspenders are showing through their jacket. It wasn’t geeky back then – it was cool, particularly if you paired it with the right boots.

The ’80s sure had a lot of things that we would wish to bring back. Some are still here, while some are starting to emerge once more. What we can’t deny is that the business clothes of the ’80s had a certain elegance that we still want to use to this day.

Meheret Hailemelekot is a Marketing Assistant at Myer and has worked with such iconic Australians brands as Jetstar, Snooze, and UniSuper.