On my recent stay in Paris, France, I had the pleasure of spending another night in the beautiful 2ieme arrondissement in the heart of the city.  This time, I made my temporary home at the Hôtel Edouard 7, an incomparable boutique hotel that’s as luxurious and stylish as its namesake, King Edward VII of England. 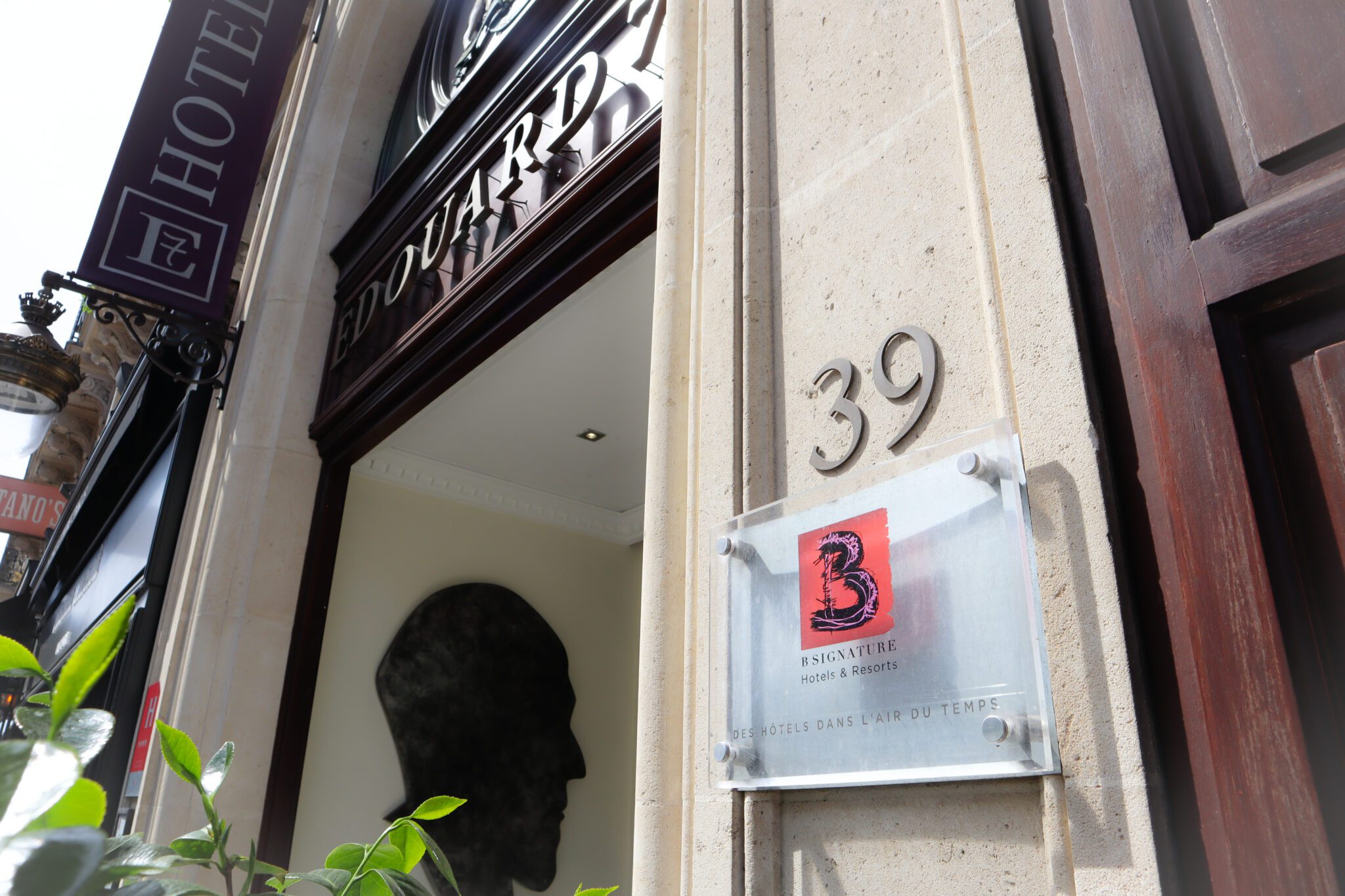 As fans of British history, or Netflix period drama The Crown will already know, King Edward VII is the British monarch who abdicated his place on the throne to marry the love of his life, American socialite and divorcée, Wallis Simpson.  Albert Edward of Saxe-Coburg and Gotha (also known as King Edward VII) was born on 9 November 1841 in Buckingham Palace, and was the son of Queen Victoria and Prince Albert. Edward VII loved Paris, and by all accounts Paris loved him back.  In French society the former king became known as Edouard VII.  While he may be an infamous and controversial figure, one thing is certain: King Edward was the epitome of a bon vivant, and that love of life shows in every aspect of the Hôtel Edouard 7. 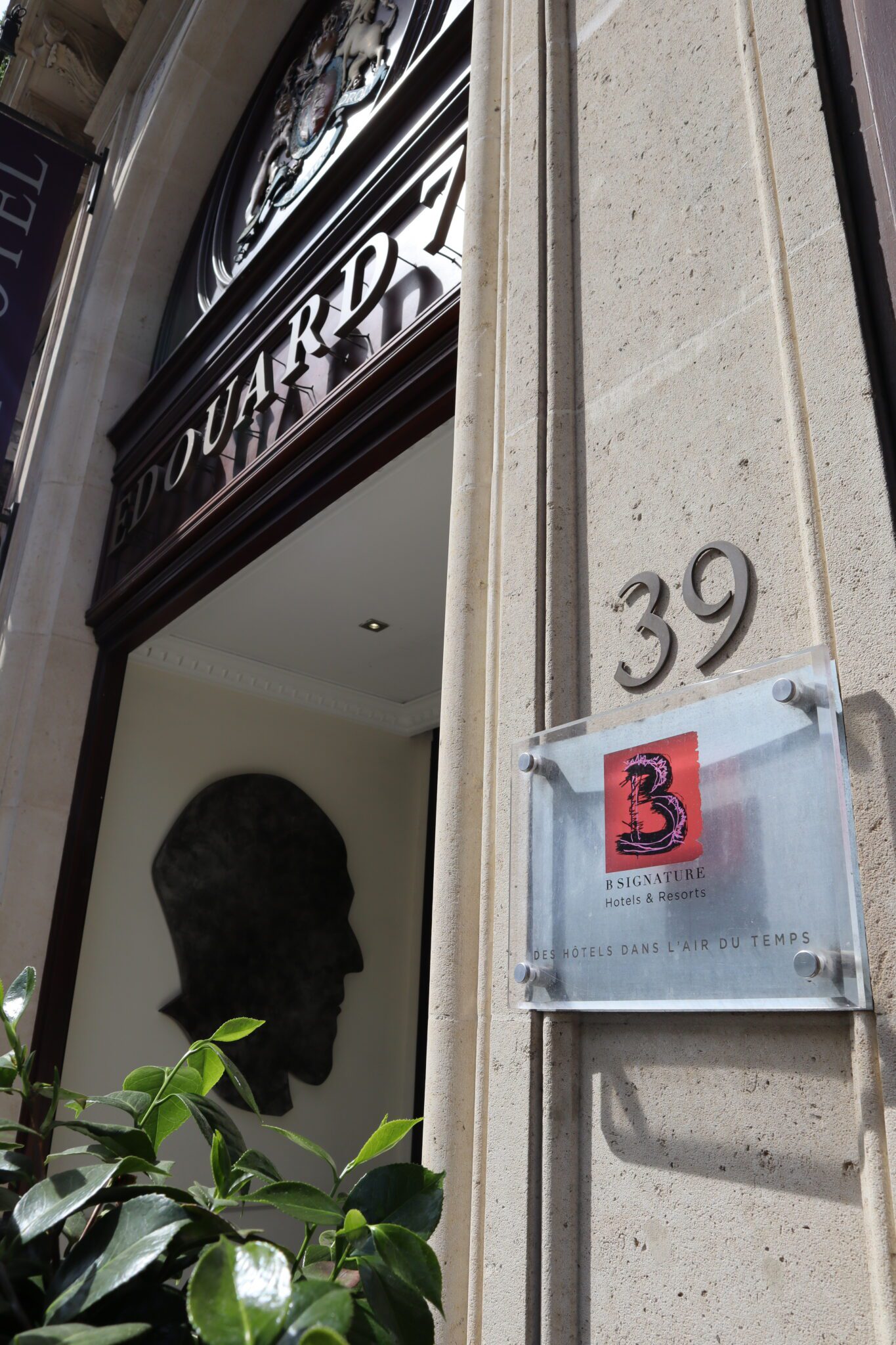 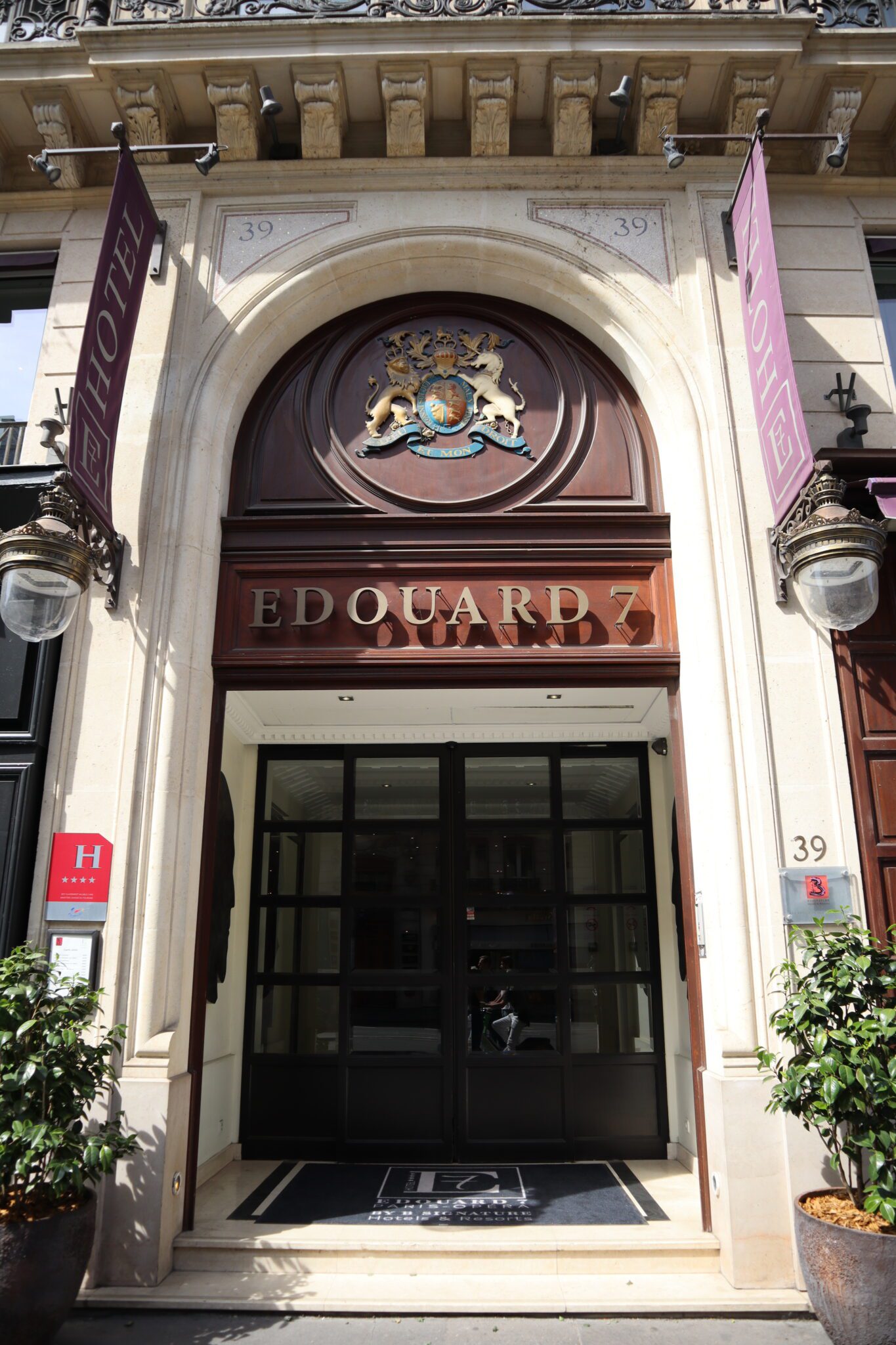 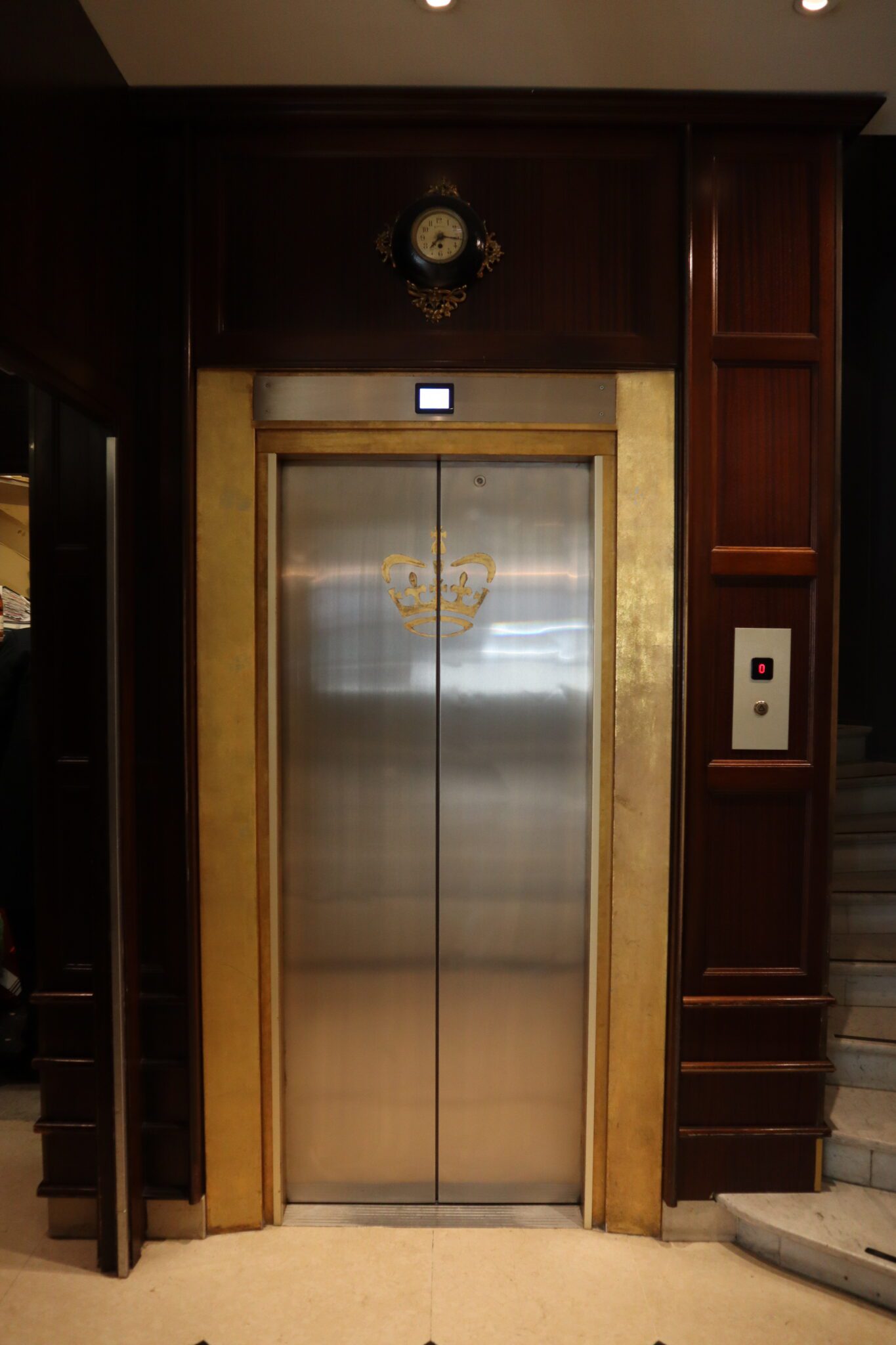 The Edouard 7 first opened in 1877 in the historical Haussmann style building where it remains to this day.  The hotel features 69 rooms, all lusciously and creatively designed to give guests the royal treatment with every stay.  And it’s no surprise, since this was the place where the former King himself would stay on his own visits to Paris, before moving to his own home in the city of lights and love.

The Edouard 7 recently underwent a 3-year transformation to create a unique hotel concept, one based on couture fashion and the Parisian love of “la mode”.  The hotel was renovated and redesigned by by Christophe Daudré, who dressed each room like it was a gleaming jewel in a beautiful crown.  With rich colours, decadent fabrics like cashmere, silk and leather and stylish little touches everywhere, staying at the Edouard 7 truly feels like visiting the home of the former king himself.

Walking into my room at the Edouard 7, my eyes widened as I took in the gleaming bathroom. 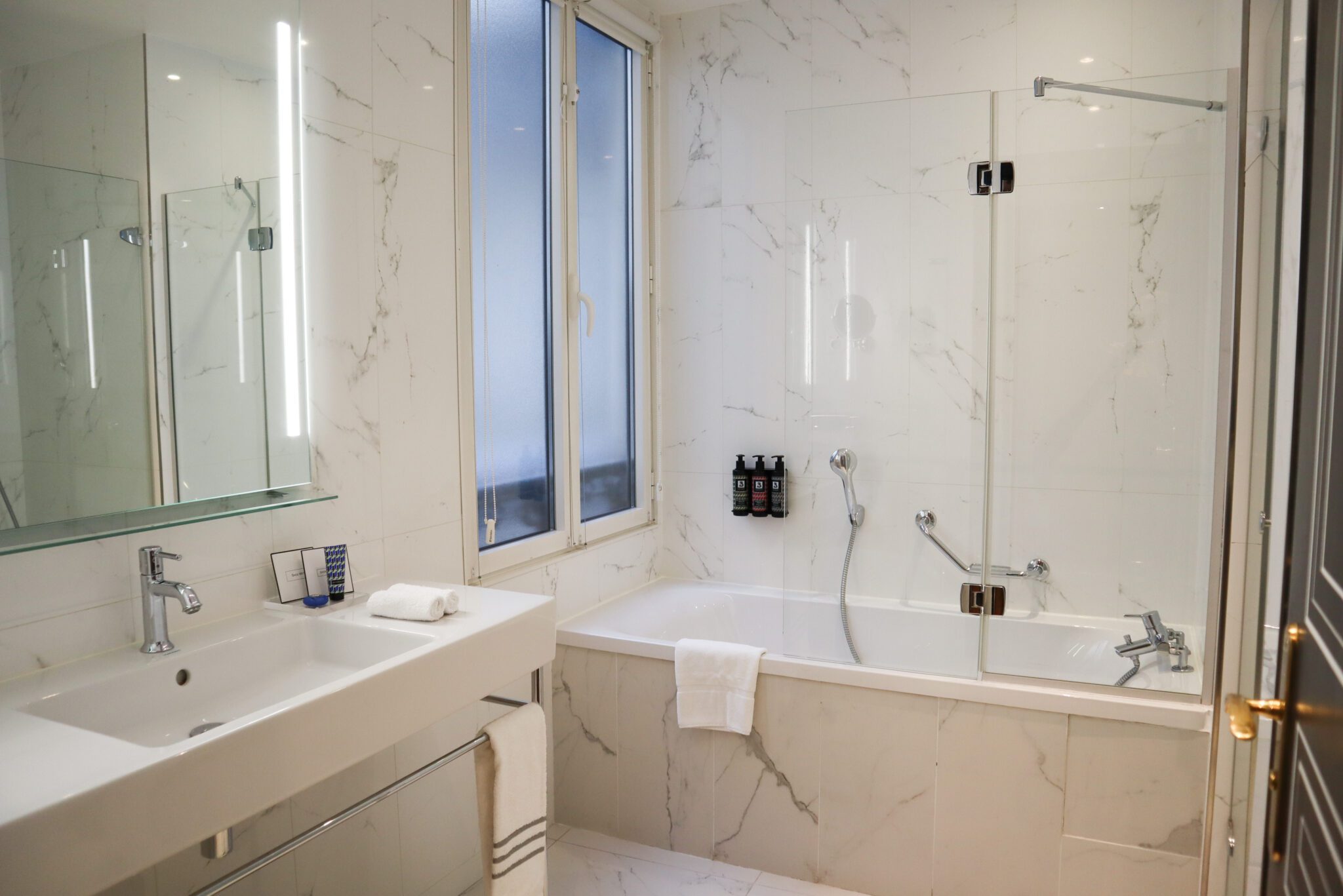 My eyes then turned to take in the rest of the room.  In honour of the hotel’s namesake, and in fact Paris itself, fashion, or “la mode” was infused in the overall character of the hotel and the rooms, and in thoughtful little touches everywhere.  I particularly loved the rose and grey tones of the room, the designer sketch inspired wardrobe curtain, and the beautiful dress/skirt shaped lamp.  And of course, the writer in me adored the room’s desk, complete with an excerpt in French from King Edward’s own personal correspondence. 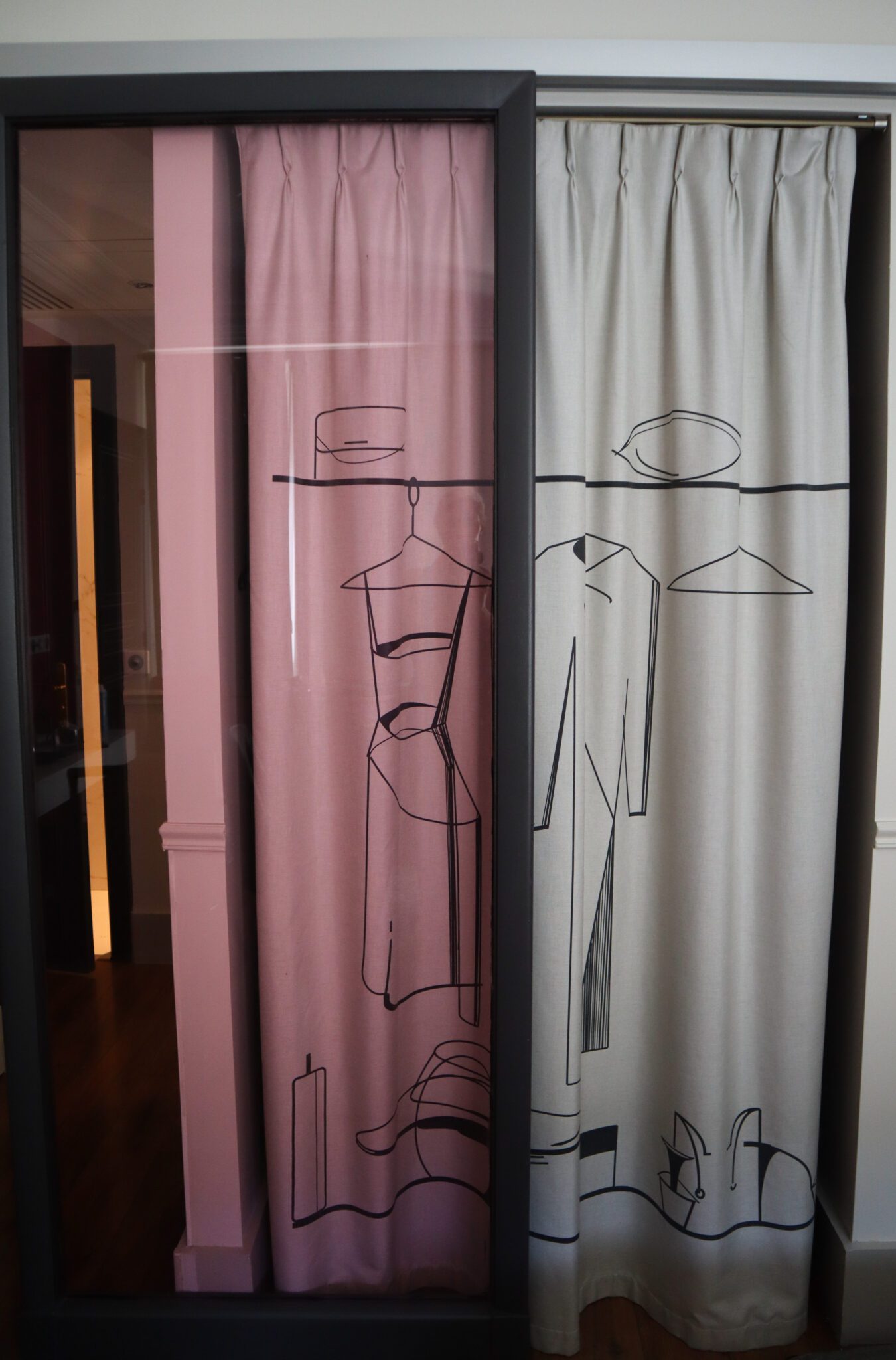 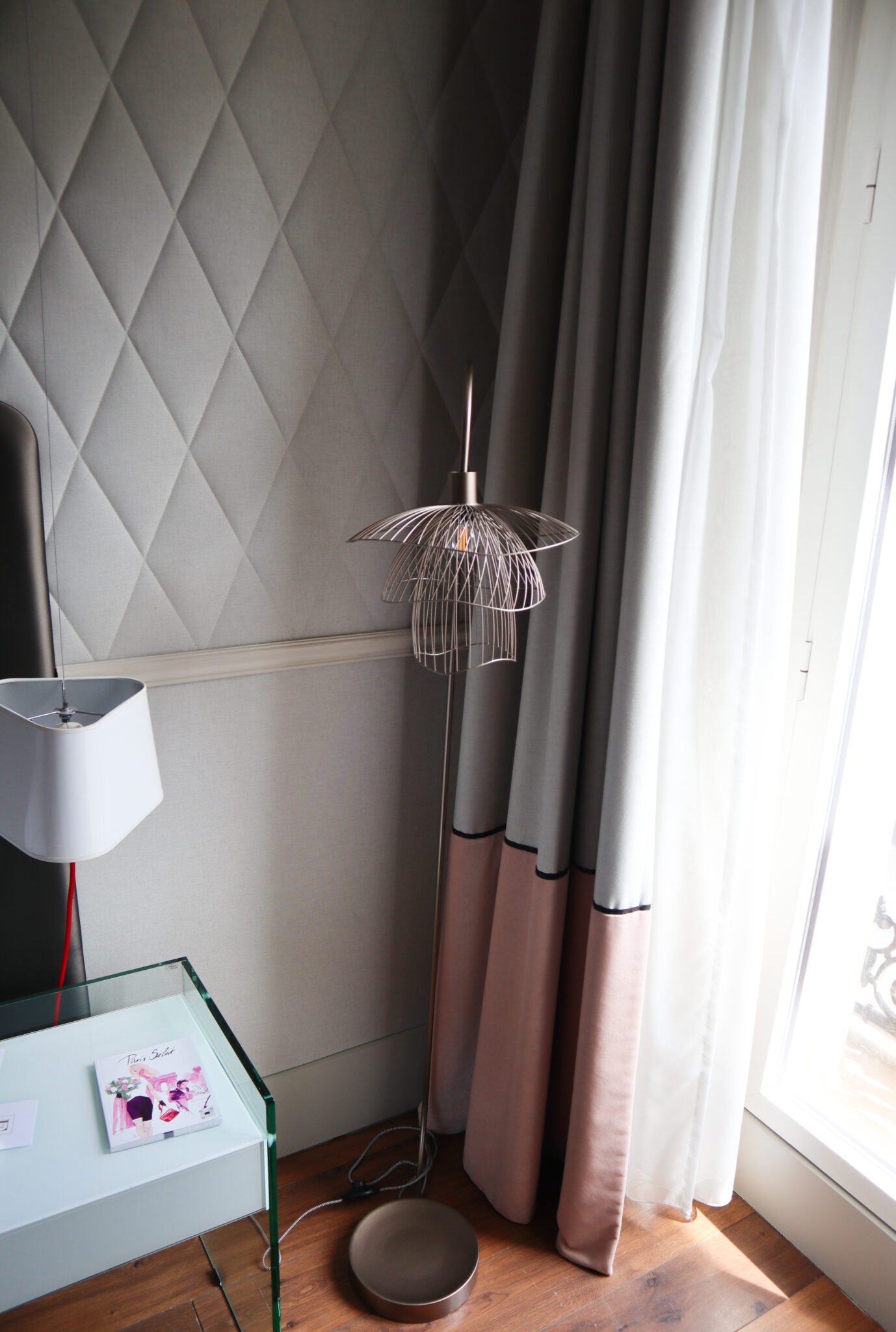 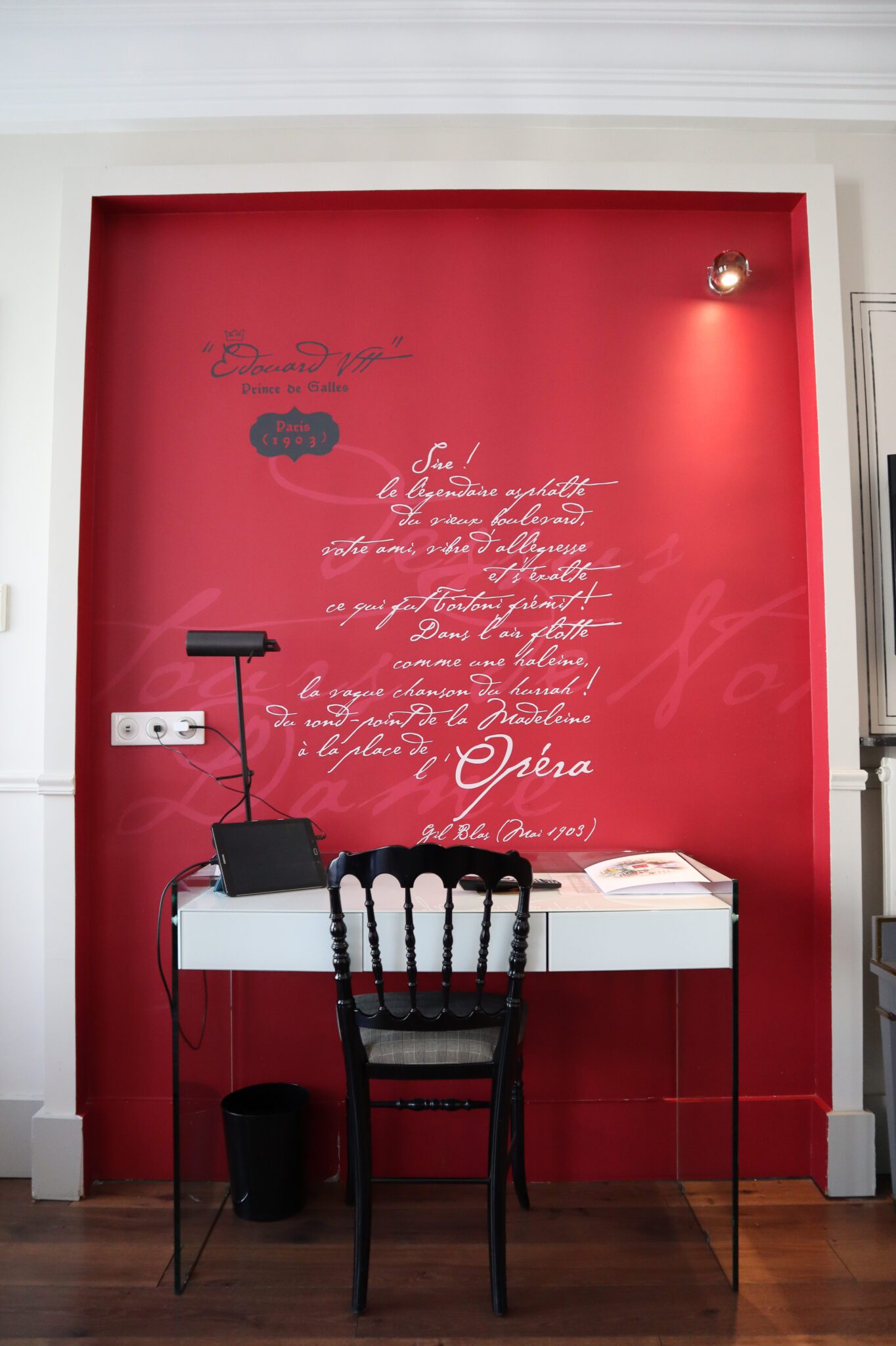 But of course, the thing a traveller notices, and embraces most on any trip, is a big, comfortable bed to collapse into after a day/night of exploring a beautiful city like Paris.  And the Edouard 7 did not disappoint.  The bed was not only king-sized but truly fit for a king, and perfect for passing out in the most pampered fashion. 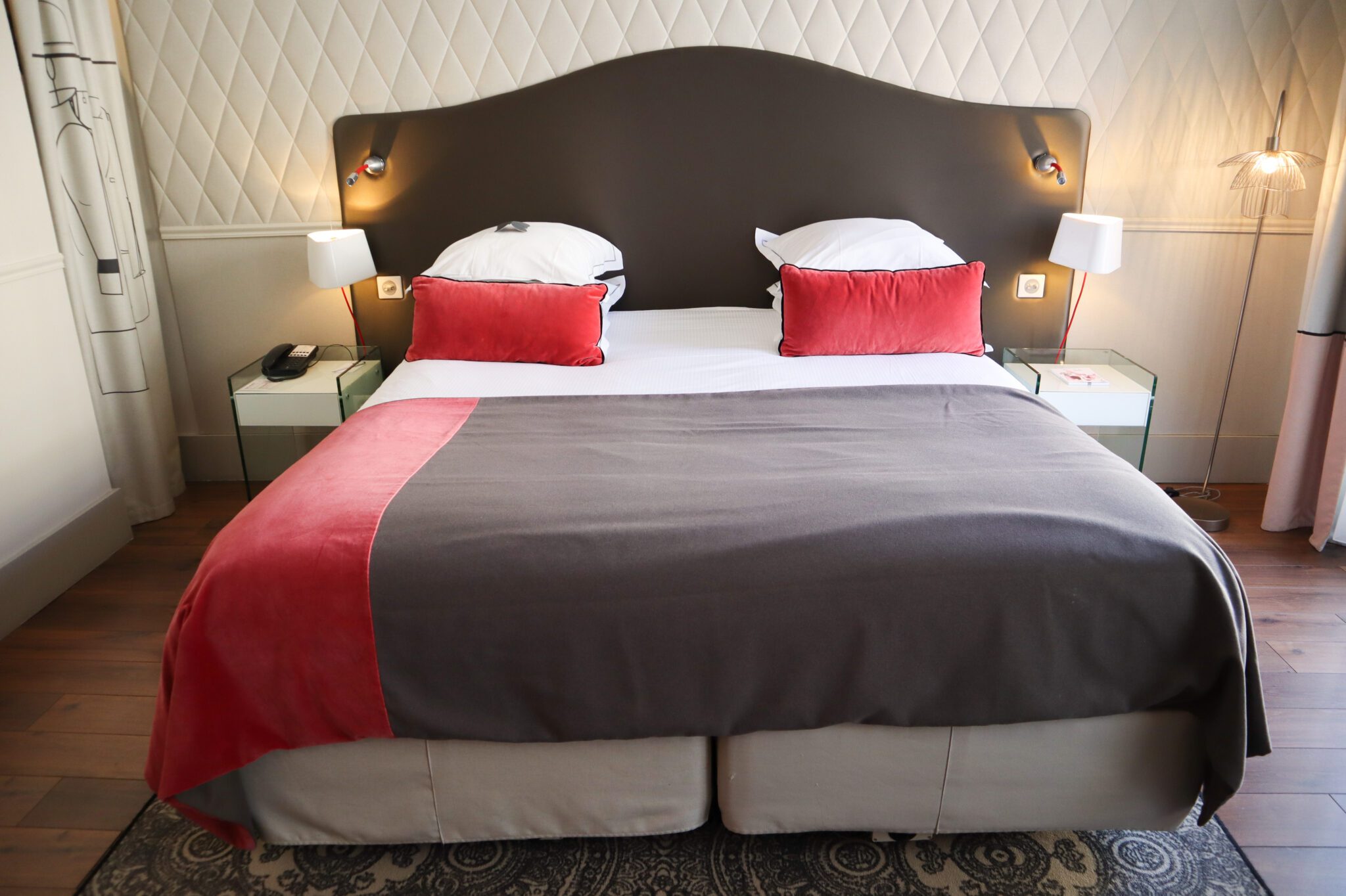 While the hotel’s history was fascinating, and the decor and design enthralling, what made my stay at the Edouard 7 most memorable was the level of hospitality and service I experienced.  The staff were incredibly kind and engaging, and could literally teach a class on top notch customer service.  The front desk staff gave me tips on what to see and do in the Opera district in Paris, the concierge cut up fruit for me by hand to ensure I had a healthy breakfast, and the gentlemanly concierge shared some of the most beautiful touches and intriguing stories about the hotel itself. 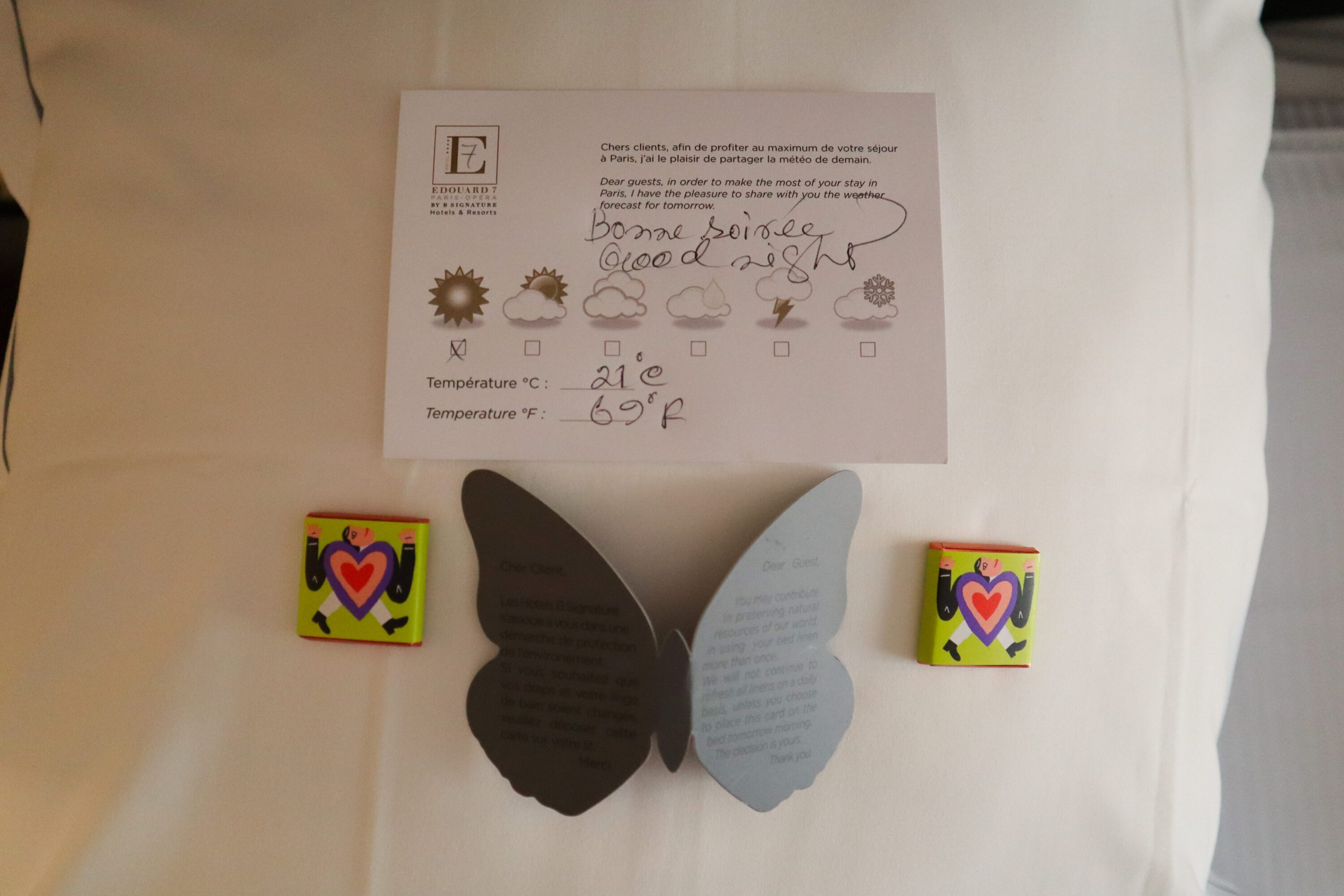 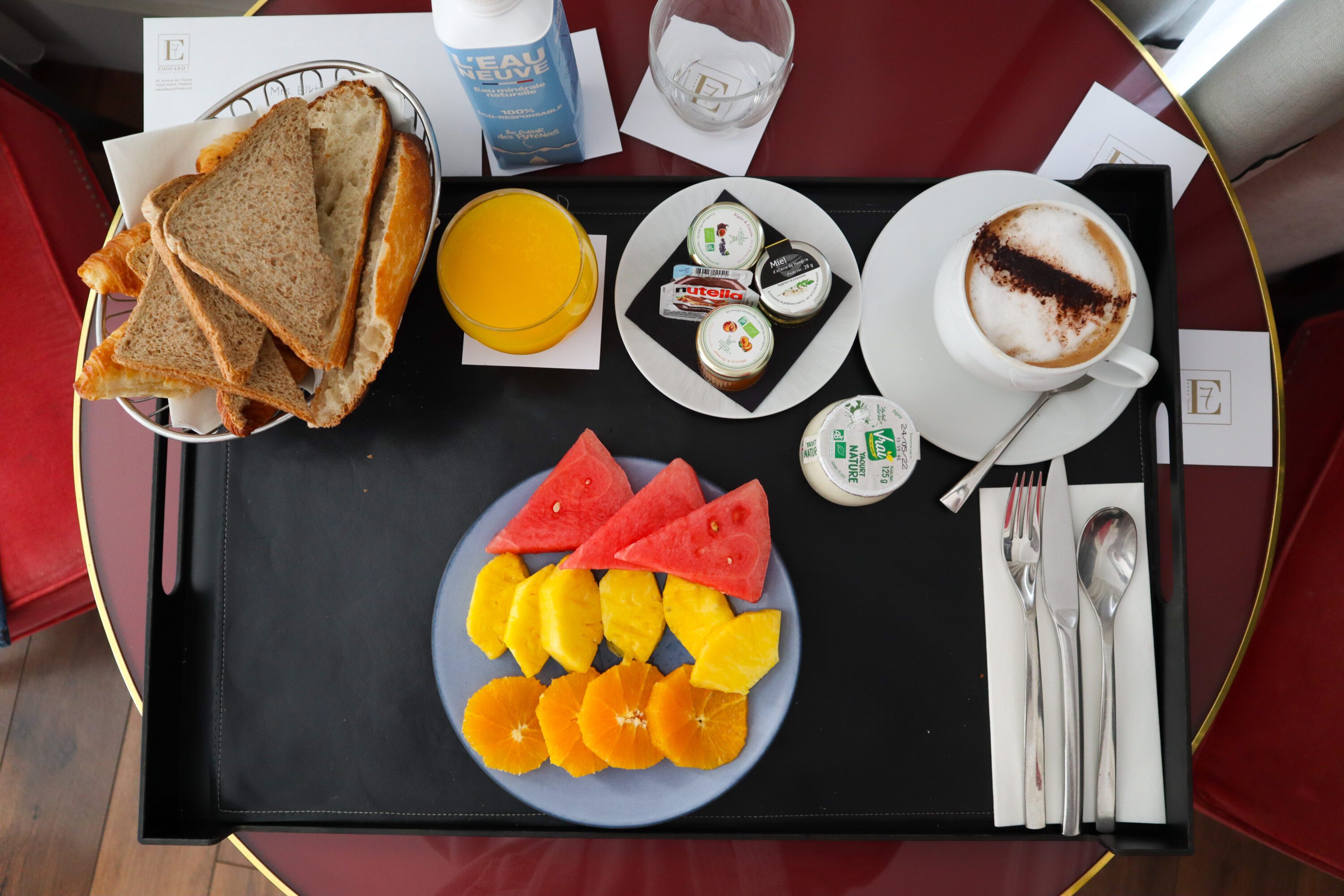 While I only got the chance to stay at the Hôtel Edouard 7 for one night, it was one of the most resplendent and restorative nights I’ve ever spent in a hotel.  From check in to check out, I felt so very well looked after, with every need met to ensure I could recharge to enjoy the rest of my trip. With its beautiful blend of history and hospitality, I can’t recommend the Hôtel Edouard 7 enough.  And if you get the chance to stay there yourself on your next visit to Paris, you can be sure you’ll get the royal treatment.