Following the success of her debut album Real Life, which has amassed over 4.5 million streams, BC pop artist Victoria Anthony has released a dramatic new video for her single “Dirty Lipstick.” The video deals with the emotional turmoil experienced after the falling out of a friendship with a toxic person, and was co-directed by Victoria herself. We got the chance to speak with her about her visual inspiration for the video, using songwriting as an emotional outlet, and taking control over her art.

Your latest video, “Dirty Lipstick,” features some larger-than-life settings and dramatic editorial-style looks. You played a big role in the visuals of this as the co-director for the video. Where did you draw your inspiration from for this video’s storyboard?

I honestly had a vision in my head for this video from the minute I wrote the song. At first, I just sketched out some cool ideas on my whiteboard and then researched for references to help build the storyboard and eventually the video treatment. I drew my inspiration for the visuals from a lot of random places. For instance, I ended up breaking mirrors for the single cover for “Dirty Lipstick.” But then someone told me it is very unlucky to break mirrors and I better do something to change that! I read online that if you bury mirrors under the moonlight, then you won’t have bad luck! So, in the music video, there is a scene with fire where I am burying these mirrors.

I also found a ton of inspiration for looks on Pinterest. I searched keywords like “lipstick aesthetic” or “edgy dark photoshoot” and that really helped me brainstorm. For the mannequin scene, I drew inspiration from the phrase “odd one out”, with the two mannequins in white dresses while I am in between them in black. From there I wanted them lit on fire to represent anger in the scene, but ironically, I just love the concept of fire and how beautiful it is. Another inspiration came from the lyric “messy makeup department” where I wanted to be sitting on the floor of an actual makeup department in a drugstore but realized it would be a logistical nightmare to rent a large drug store.  So instead, we built one with two walls like a store aisle where I am sitting on the floor against the shelves of makeup. We got this cool floor from a party store that lights up in different colours – it ended up being a gorgeous aesthetic. 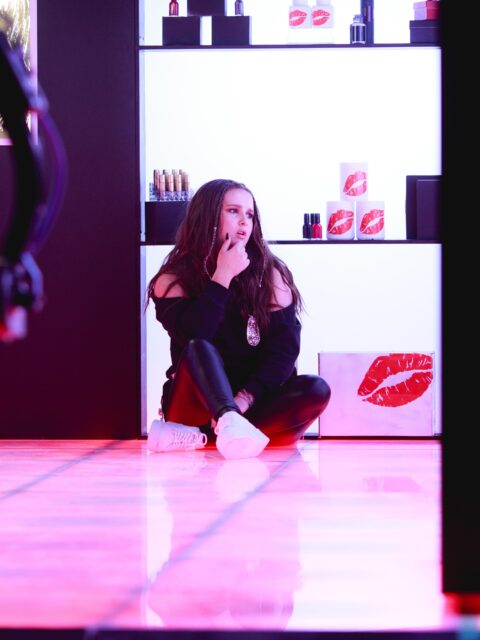 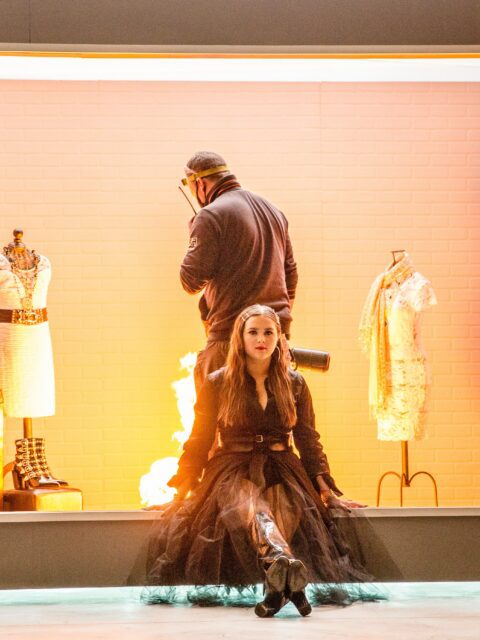 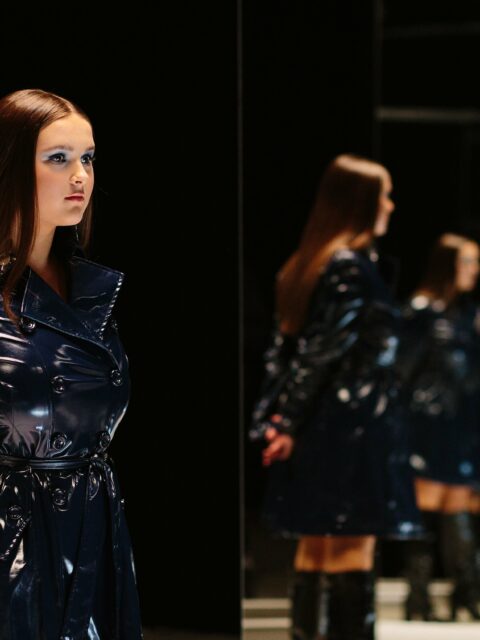 All the different looks are meant to represent a building emotion, rather than a plot. What emotions are you portraying in each of the different scenes of the video?

Each look represents different aspects of anger. The fire mannequin scene is about active anger. It represents the initial fury in the emotional cycle. The throne scene represents the confidence you feel once you are coming full circle. You’re not above caring, but you are just above letting it consume you. You are in control. The makeup store scene represents the emotion of nostalgia and the pain when you look back on happy memories. The blue silhouette scene demonstrates that calm hurt feeling when being betrayed.

What was the collaboration with your co-director, Brock Newman, like? How did you start working together?

Brock and I first worked together when he directed my music video for “Real Life.” We instantly clicked and he became my go-to guy. When I was planning the video for my song “Breathe Underwater,” I asked Brock if he would co-direct it with me and he didn’t hesitate for a minute. It was also a big production video with some scenes that were complicated to execute, but were integral to the overall concept. Anyone else who didn’t know me would have likely balked at co-directing a video with a teenager, but he was all in. Brock and I also co-directed the live performance video for “Breathe Underwater” which was featured on Grammy.com as part of their Press Play At Home Concert Series.

Once I had the concept for “Dirty Lipstick” flushed out, I brought it to Brock right away. From my initial ideas to all our iterations, we pulled it off in a big way and brought my dreams to life. We did at least a hundred Zoom calls leading up to the shoot! On set we keep it efficient and fun. It’s truly an honour to work with someone of such talent and kindness.

The lyrics of the song deal with a falling out with a toxic person in your life, but you’ve said you wrote the song at a happy time in your life. Was this an emotion you were revisiting after taking the time to process the situation? What was it like writing the song after going through the motions of this experience?

I wrote “Dirty Lipstick” after mentally revisiting the situation. I totally overdramatized the way I was feeling to get that intense emotion in the song. One day I was on the phone, and somebody hung up on me. I got up and started pacing. I took out all my pent-up anger and wrote the chorus of the song. It was a whirlwind experience. Moments like these are the reason that this has been a happy time in my life. I have finally found the best way to use songwriting as an outlet. Whenever my emotions get too big to express in other ways, I write.

Do you often draw from life experiences for your songwriting inspiration?

I always draw from some sort of life experience when I write. Sometimes I like to dream up stories, but the emotion is always real.

You seem to be a jack of all trades being skilled as a songwriter, musician, taking the lead in your branding, mixing, mastering, and production. How did you get involved in all these different facets of being an artist?

My perspective is: if my name is on it, then I have to be the one driving it. I’ve been lucky enough to work with and learn from incredible people in all aspects of the music industry, and they have all treated me like an equal, whether that be in a songwriting session, or doing a final mix, or on the set of a video.  Every opportunity I get to learn, I take. Because every song I write means so much to me, I like to make sure the recording, artwork, music video, branding, etc. all fit my vision.

What advice would you have for other young women looking to take more control over their art?

Pay attention. On every set, in every studio, and every conversation – take in everything you can. You can never do it all, but you can always do more. Also, recognize when other people around you have something amazing to contribute as well and always look to bring out the best in other people as this does not work without a team.

First and foremost I want to thank ADDICTED for giving me this time and sharing my video with you. I put my whole heart and soul into this song and I hope you like it. Also, please keep an eye on my social media for some exciting things happening over the next weeks and months.