Omar Doom is a name you don’t forget. A fact made even truer when you finally put a face to the name.

Best remembered for his memorable turn as Private First Class Omar Ulmer in Quentin Tarantino’s Inglorious Basterds, the Pennsylvania-born actor, musician, and artist has, in addition to stealing scenes from Brad Pitt, fashioned an eclectic resume for himself.

And yet, all roads point back to Tarantino. Throughout their longstanding friendship, the director’s advice has guided Mr. Doom’s career time and time again. Twenty-two years on, ADDICTED’s Myles Herod chats with the multi-faceted artist to recount his journey that can only have happened once upon a time in Hollywood.

ADDICTED: When did you first meet Quentin Tarantino?

Doom: It was back in 1998. We were introduced through mutual friends.

Were you a fan of his films before meeting him?

Doom: A huge fan. Everything I’ve learned about making movies I learned from watching him work and the finished work itself. I still watch his stuff regularly.

Tell me about your stage name “Omar Doom.” What’s the story behind Tarantino actually coming up with it?

Doom: I was having lunch with Quentin at the restaurant named Toi, a Thai rock n’ roll diner on Sunset Blvd. I was twenty-three at the time. I remember I was telling him that I was thinking about shortening my name from Omar Makhdoomi to Omar Makhdoom. He said, “Why not just go with Omar Doom?” At first, I thought it was crazy. Then after a while, I starting liking the way it sounded. I was like, “Fuck it, I’m gonna do it.” I haven’t looked back.

Let’s talk about your foray into music. Your latest endeavour is called Straight Razor. What has the opportunity provided you?

Doom: I started putting out music under the name Straight Razor in 2013. I’ve been in bands ever since I was a kid. I have a single out now called Iblis. It’s a dark, menacing, driving, techno sound. It also has a very cinematic quality to it.

When push comes to shove, do you consider yourself a musician or an actor?

Doom: Music is something I had to do from the very beginning. It was an obsession. I was drawn to it. I always wanted to act, too. Acting was something that I always thought would be, like a fantasy. I never thought it would be possible. Especially coming from the east coast. You’re nowhere near the epicentre of movie acting.

Take me back to the beginning. What was your impetus for moving to LA?

Doom: After I graduated from Parsons School of Design in New York, my sister was living in Los Angeles, and she had started a clothing company called Diabla. Long story short, she convinced me to become an artist for the company. You know, creating all the t-shirt and graphic designs. It seemed like a great reason to move to California.

When did you start working in the film industry?

Doom: Meeting Quinten Tarantino was a very pivotal moment. That friendship lasted a few years before he ended casting me in one of his movies. However, during that time, I was very influenced by everything he was showing me. See, when you go to his house, he puts together reels full of trailers. Maybe a cartoon here or there.  Then he’ll play a movie, then maybe a short. Then he’ll play another movie!

Tarantino actually owns a movie theatre in LA called the New Beverly. Have you been?

Doom: All the time. It’s funny you mention it, but if you go to the New Beverly, it’s exactly like going to Tarantino’s house. You’re getting the experience of his home and going to watch movies with him. And he’s programming all the films there, too. 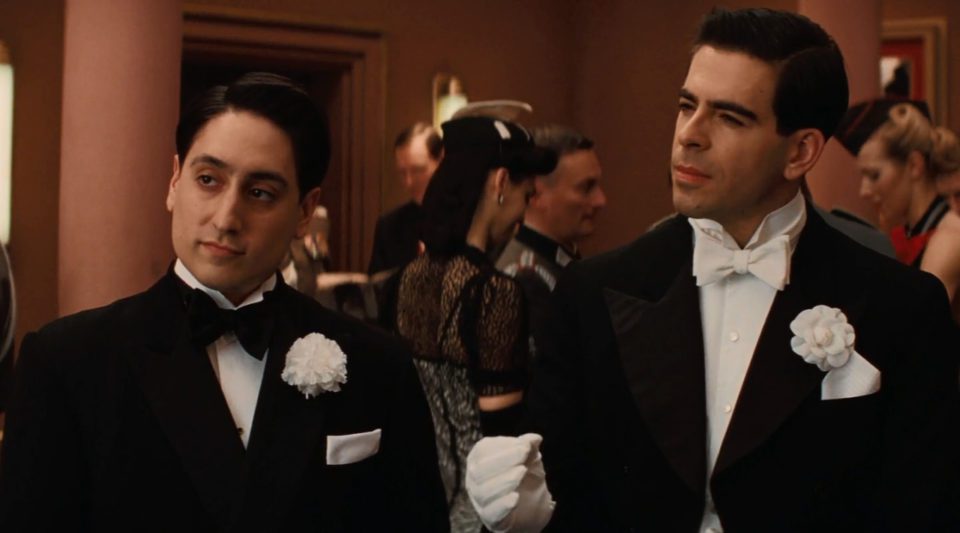 Inglorious Basterds is arguably your most famous role. Do you still get recognized?

Doom: Oh ya. With Inglorious Basterds it’s the hand gesture that does it. Or fans will ask me to say the “Dominic DiCocco” line, which has been meme-ed like crazy.

You’ve worked with Tarantino three times now. 2019’s Once Upon A Time In Hollywood being the latest…

Doom: I had a scene with Brad Pitt, Lena Dunham, and Margret Qually that didn’t make the final cut. I played a biker with the Manson hippies. I was there for a couple of weeks in the desert, in 100-degree weather. It’s always a blast working with those guys, though. I got to do some improv with Brad that Quentin ended up liking. He said, “Let’s shoot it!” You’re talking about once in a lifetime opportunities, here.

You worked with Brad Pitt on Inglorious Basterds. Ten years later, you’re working with him again on Once Upon A Time In Hollywood. How was it?

Doom: Funny story. You can still spot a bit of me in Once Upon A Time In Hollywood. I have a beard and I’m wearing a headband. Anyways, when I first got on set, Brad came around saying “hi” to everyone that he’s about to do the scene with. When we get face-to-face he doesn’t initially recognize me. Then it hits him. His hand goes over his mouth, yelling, “Oooooh! Is that Omar?! Last time I saw you we were killing Nazis!”

How does the experience on Tarantino’s set compare to other productions you’ve worked on?

Doom: His movie sets are like no other. His crew are all family to him. Sometimes he’ll have music playing on speakers in between takes, he’ll be curating playlists, too. I remember working on Deathproof, and him telling me, “You know your next movie is going to suck, right?” He was right. There’s nothing actually quite like it.

What do you see as being Quentin’s greatest strengths as a director?

Doom: He has a sophisticated way of blocking his scenes and framing his shots. A more artistic approach than he’s given credit for. People normally praise him for his writing, but I think he’s an excellent director, too. He has very strong convictions. He was determined about doing non-CGI high-speed car chases in Death Proof. So much so that he built a camera truck that he sat in, driving over a hundred miles an hour, just to achieve those road shots you see in the film.

What do you make of today’s film industry?

Doom: Well, we are seeing the end of film. Of actually shooting on film. There’s actually only a few directors out there today doing it and championing it, Tarantino being on of them. I actually feel so fortunate to be captured on film in his movies because I don’t know if I’ll never be able to do it again.

Tarantino has said his next film, his 10th film, will be his final one. Are you hoping to be in it?

Doom: Of course I am. Are you kidding? I’ll be knocking on his door as soon as that script comes up.