Gary Topp has had quite the life. As one of Toronto’s premier rock promoters and tastemakers of the 1970s and 1980s, he along with his business partner, Gary Cormier (known as The Garys), introduced Toronto audiences to acts like The Ramones, The Police, and many others.

ADDICTED’s Myles Herod chatted with Gary Topp where he candidly discussed the graphic novel and how his passion for pop-culture helped create a million memories for Torontonians.

ADDICTED: Why do you think your life story warrants the graphic novel treatment?

Gary: Well, it shows a kid growing up in a specific city (i.e. Toronto) and memories that were universal. I told stories that I thought were worthy of a comic book. I thought people might have been expecting the day-to-day backstage, rock and roll stories, and I really wasn’t interested in doing that. I’m tired of reading all those books. People were bugging me for years to write a book. I tried. I wasn’t happy doing it. I got about eight pages in and I realized I didn’t want to do that for five years.

Tell me about your relationship with Dave Collier – the author and illustrator of Topp: Promoter Gary Topp Brought Us The World. What made you decide to work with him?

Gary: Dave dropped out of high school in 1979 at the age of 16. Right around the same time, we hired him at The Edge (The Garys’ infamous Gerrard St. new-wave club from 1979-1981). Because he was too young to work at the bar he worked as a busboy. When I decided to do the graphic novel, Dave Collier was one of the first names that hit me. Dave has had a prolific career as a comic book artist. He was around during the time of the story, and I thought he would be perfect. He is very precise in his drawings. It’s the kind of art where you can read the book 10 times and you might not catch every little detail.

When I first approached him with the idea for the book, he was working on something else and couldn’t do it. Then he called me about a year later and asked, “Do you still want to do it?”

And you said yes…

Gary: Of course! He completed it in three years.

Your youth is lovingly depicted in great detail throughout. Was Toronto in the 1950s and 1960s as special as it’s presented?

Gary: On Facebook, there’s a group called Yorkville 1965-1968 and they treat Toronto’s Yorkville scene like it was the be-all and end-all of their lives. It was an interesting time – I did go to Yorkville to see folk music – but punk rock and what came after punk rock has so much more influence on the world than the Yorkville scene. The folk scene in Toronto in the 1960s, with Neil Young and Joni Mitchell, had nothing on the punk scene that was to come. It didn’t influence anything.

Gary: When punk rock started, and everybody started doing it yourself, man the whole world changed. Architecture changed, real estate changed, fashion changed, entrepreneurial endeavours changed. People who liked to cook decided to open a restaurant. It was so much more important.

There are some great sections in the book were you recount seeing Bob Dylan and the Rolling Stones onstage in their early years. What effect did those shows have on you?

Gary: They were totally important and electrifying and influential. That said, I’ve seen some pretty amazing shows. For example, Suicide at the Horseshoe (a venue which The Garys took control of bookings for in 1978) is as good as seeing Bob Dylan in New York in 1961. I mean, not many people saw Bob Dylan in those days. To me, he was the Ramones of folk music. It just changed my whole mindset about music.

Same goes for the Rolling Stones. From folk music, I then heard “Not Fade Away” and I was like, “Holy fuck.” You could compare the way they dressed to the way Bob Dylan dressed. Rough and ready. Just the images of those two artists had a huge effect on me. From there, I went more into jazz and avant-garde music. I guess you could say I was always on the outside. 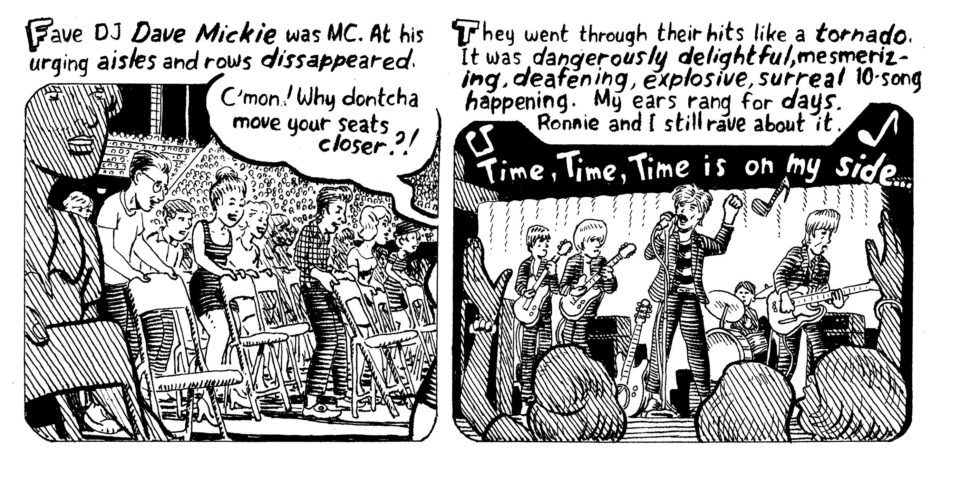 The book, while funny, is also poignant with each page feeling like its own short story. In particular, there’s a section about a bracelet you wore for decades that I couldn’t stop thinking about.

Gary: It was a 10 cent bracelet from a hardware store. One link cut with pinchers and then squeezed back together to fit. It eventually, after 30 years, wore out and fell off my wrist. After that, I stopped promoting shows. I was getting fed up with the business. It had changed so much. Soon after, my mom had her stroke, too. It was my good luck charm. When it finally broke, my life changed with it.

What would your parents have made of this book?

Gary: They were proud of me. They came to The Police Picnics (the annual three-year outdoor festival featuring The Police, put on by The Garys). Even though I was a terrible student and didn’t fit the mould of the kids I went to school with, they encouraged me. They knew what I wanted. It was my mother who found Centennial College and said I should try it. She knew I didn’t want to go to University.

You got the idea to start screening films for audiences at Centennial College, didn’t you?

Gary: Actually, I had shown films prior to attending Centennial College. I had a film society in Toronto for three years. We would sell out by subscription. 50 people would come by every Sunday afternoon. It would be everything from French movies, American underground movies. We were even busted by the Toronto morality squad for showing Andy Warhol’s Chelsea Girls.

There’s a moment in the book when you dismiss your music legacy and say that The Original 99 Cent Roxy theatre in Toronto was your greatest achievement. Why?

Gary: I don’t take anything away from what Gary and I did as music promoters, but I think the way we ran our shows and our clubs were influenced by The Original 99 Cent Roxy theatre that I helped establish in 1972 and ran until 1976. The Roxy was probably the most unusual venue ever, anywhere. I mean, it was brilliant, it was creative, it was spontaneous, it was out-of-this-world, it was entertaining. Years later, when I moved out of The New Yorker theatre and was out of the movie business, I couldn’t go to movie theatres for a long time. They were just too boring and conservative. The Roxy was like Animal House personified. The things that we did, like, giving out laughing pills, cigarette papers, matches, feeding 700 people between the intermission of War and Peace. It was a very creative time. You’d go to the theatre and you really had no idea of what was going to happen. Like, showing The Texas Chainsaw Massacre while having someone run down the aisle with a chainsaw.

When you transitioned into promoting concerts did the fans of The Original 99 Cent Roxy follow the music you brought to Toronto?

Gary: Yes. Gary and I were lucky. We had built a community. We could do the Ramones one night and Cecil Taylor the next night and people would come because they trusted our judgement. They might not have liked it, but they trusted it. They trusted it to check it out.

The Garys book The Police to play their first Toronto show at The Horseshoe in 1978. (Dave Collier / Conundrum Press)

I want to try something. For the next few questions, I want to give you some names and you give me the first thought that pops into your head. Sound good?

Gary: I got chills when I first heard them playing. I felt like a new life was starting. They were the first thing Gary and I went for. We built a stage to bring the Ramones to Toronto. Interestingly enough, we had them play 36 times during their short time as a band. I would say other than CBGB’s, we did more shows with them than anybody else in the world.

Gary: A complete breath of fresh air. When I got their first record in 1972 and played it at The Original 99 Cent Roxy theatre I thought, “Oh fuck!”. I had never heard anything like their sound. I convinced a Toronto promoter to bring them to Massey Hall and I found a space for the band to rehearse at. It was during that time I brought my cat Boston with me to the restaurant where Bryan Ferry was eating. They both looked a lot alike. Ferry just stared at me, eating a hot hamburger, with fear in his face.

Gary: When I got back into promoting in the 1990’s I discovered the Dixie Chicks on a country TV station. People were asking, “Who the fuck are they? They’ll never sell.” I on the other hand was thinking, “This is the greatest band that’s happened in 20 years!” When I did call the record company to find out who there were, you could hear the guy on the other end getting a hard-on. Turns out, they had been trying for months to find a promoter to present them in Toronto. Thing is, nobody wanted anything to do with them. When we finally held their show at Massey Hall, it sold-out in advance. If you had seen them live, I would say they were of the same entertainment level as The Pogues, The Specials, or The Stray Cats. They were incredible and ended up being one of the best bands I’ve ever worked with.

Gary: I think it’s killed the music business. I’m glad I’m not in the business risking all that money. Somebody told me that Ticketmaster has lost something like $92 million dollars through this. I think the drive-in concerts are funny at best. I don’t know how anyone could enjoy something like that. It seems so boring to be stuck in your car or a little space a mile from the stage. I have to say, though, this whole time has been great for promoting the book.

That in mind, are you happy with how the book has turned out?

Gary: I’m very happy. I’m happy because the reactions from the people I know are a very emotional thing. Their lives are drawn into it, even if they’re not in the book. You know, we tried to include as many people as possible. The book is kinda about me, but it’s also about recalling people’s lives. You know, backstage stories don’t really have an emotional effect. This book was meant to be different than that.

Gary, with all you’ve seen and done in your life, what do you know for sure?

Gary: In maybe 1967, one Saturday afternoon I went to the Colonial Tavern, an old jazz club in Toronto at Yonge and Queen, to see the great Thelonious Monk play. After the show, I interviewed him for my school newspaper and he gave me a quote that I’ll never forget: “The only cats worth anything are those who take chances.” I’ve always lived by that.