In what has been an annual Labor Day tradition in the Quebec town of Rouyn-Noranda for nearly two decades, the Festival de musique émergente, also known as FME, is still set to go ahead from Sept. 3rd through Sept. 5th.

Celebrating its 18th season, the new small-scale edition (implanting mandatory masks, social distancing, and reduced venue capacity) is committed to keeping the artist line-up intact and eclectic. Showcasing the talents of Backxwash, NOBRO, Corridor, We Are Wolves, and Jesse Mac Cormack, ADDICTED’s Myles Herod spoke with FME promoter Marilyne Lacombe about the challenges and triumphs of putting on a music festival in the age of COVID-19.

ADDICTED: Tell about the origin of FME (the Festival de musique émergente). When did it start?

Marilyne: We’re now in the 18th edition of FME. It started as a community initiative to bring music to music lovers around the city of Rouyn-Noranda. However, over time, it has grown larger over the years to where it’s become an annual Quebec music meeting. Today, we now have people who travel hours from Montreal, and even outside the province to attend.

What makes FME unique compared to other festivals?

Marilyne: There’s a couple things. For instance, instead of seeing the same acts that you’d see elsewhere throughout the summer, you’re getting the first look as to what is coming next. We strive to get new projects that are arriving in the fall and winter of the upcoming year. The discovery component of FME is vert special to us. People attending the festival are coming for something new and fresh opposed to seeing bands you’ve already seen.

What’s your role with FME?

Marilyne: 10 years ago, I was just part of the audience when I started attending FME, driving eight hours from Montreal just to immerse myself in the music. Luckily, just last year I became part of the programming team – four to five people putting this lineup together. I book some of the international groups, as well as the more “left field” weirder projects. It’s my second year this year, so its pretty challenging in two weeks but it was fun to do.

How is this version of FME different than year’s past?

Marilyne: We just got the green light from the government four weeks ago. So we really had to put together everything very quickly, which was obviously a challenge. With that, it’s obviously going to be a lot more intimate with a reduced capacity at the venues. We’re also doing a lot of pop-up shows outside because it’s a lot safer than indoors. We’re really excited in exploring the element of surprise throughout the upcoming weekend at the festival. It’s going to be really intimate this year. 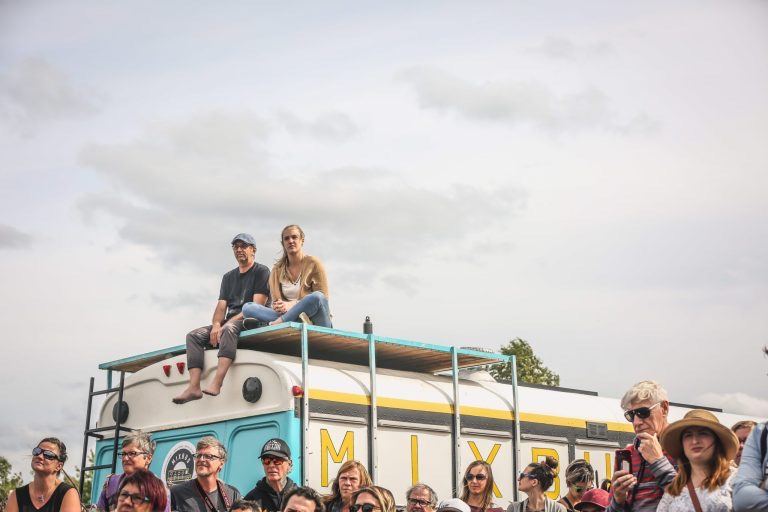 Have you gotten a sense of how the people of Rouyn-Noranda are feeling? Are they happy it’s happening?

Marilyne: Ninety percent of the shows are already sold-out, which is a really good sign! I think the community of Rouyn-Noranda are really excited to see new shows happening again. It’s one of the first festivals happening since this whole pandemic started.

What will be some standout acts at this year’s FME?

Marilyne: One of the acts I’m most excited about is Backxwash. It’s one of the most refreshing things that’s come out of the pop industry in Quebec in years. She’s been nominated for the Polaris Music Price shortlist with a style of rap that is really raw. It’s exciting to see a trans woman becoming the flagship of hip-hop in Quebec.

Another interesting project we have on the lineup is Corridor. In getting signed by the US label Sub Pop earlier in the year, it was supposed to be their summer, they were supposed to tour the world. Obviously, that all fell through. So, we’re excited to be the ones presenting them for the first time within this context.

Other than that we have some really cool female projects in the lineup. Bands like NOBRO and Maggie Lennon. It’s going to be really exciting seeing all these groups come together. These are bands who haven’t played to an audience in so long and who are very excited to share their projects.

Marilyne: It’s going to be special for sure. We’re hoping that the festival will be able to go back to its full potential. We’re having fun being challenged by this whole situation but we really want to go back to something a bit more flexible in terms of inviting people outside of Quebec and Canada. So, if everything comes back to some sort of normal next year I think it’s going to be very ambitious programming because we’re hungry for it.