They just couldn’t wait!  So said the subject line of the press release I received, dropping the entirety of the OSHEAGA Music Festival lineup, several months earlier than usual.

Social media was abuzz with music news on Monday.  The Grammy’s, though marred by tragedy, yielded some incredibly passionate, powerful and incredibly entertaining performances, making for an easy segue to what normally would have been OSHEAGA’s headliner announcement.  Considering the love surrounding Lizzo, it was an easy prediction to pick her as one of the festival’s night closing acts (Saturday to be exact).  Rounding out the festival nights are Foo Fighters on Friday Night and Kendrick Lamar Sunday, and normally fans would be waiting until Spring to learn where the lineup lands, but not this year!  After 15 years, OSHEAGA has decided to lay it all out, and fans are thrilled with what they saw.

OSHEAGA has built its world renowned reputation by offering local fans and passionate music lovers from all over an unforgettable and unique cultural experience, combining music, art, food, and community. The 3 Day festival, taking place over the August long weekend (July 31st to August 2nd, 2020) on an island in the middle of the St Lawrence River, overlooking the spectacular Montreal skyline, will showcase over 100 acts to play in a beautiful setting.  And the best part? It’s just a short drive or metro ride away from the city when the music winds down for the day.

This year, OSHEAGA will be boasting an diverse and varied lineup sure to please almost every music lover and festival goer.  I for one will be thrilled to catch my fave Tove Lo, Toronto’s rising hip hop superstar Haviah Mighty and actually cool guilty pleasure Charlie XCX, along with his majesty Kendrick, and her highness Lizzo, the music royalty that have ruled my playlists across multiple devices for the past few years.  Will you be hitting up Osheaga this year?   Tweet me at @thenadiae and let me know!

In the meantime, check out the incredible OSHEAGA 2020 lineup, and buy your passes today!   And stay tuned for coverage from ADDICTED in August! 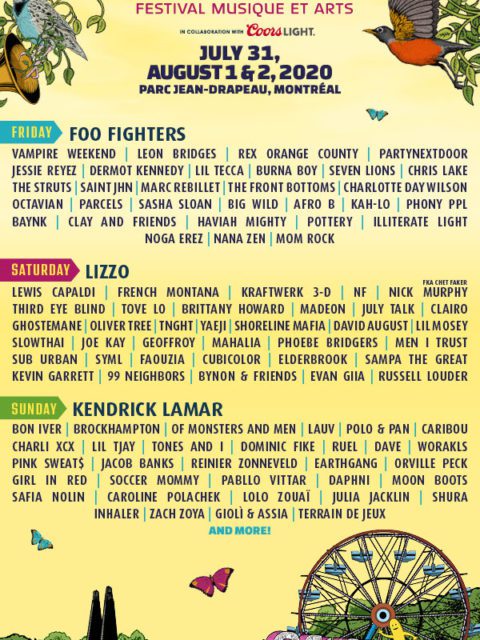