I know everyone and her sister have either lauded or condemned the politically, sexually and culturally charged Super Bowl LIV show, and I’m here to add 3 of my own reasons to the  THAT WAS AWESOME argument.

When it comes to Super Bowl Halftime Shows, history has shown that it takes a woman of color to do anything of cultural significance with the platform, purposefully or not. With the controversy and commentary swirling around them, Jennifer Lopez and Shakira join the ranks of Janet Jackson and Beyoncé for breaking the brains of White America with their music, their messaging, and mostly their bodies.

I’m not here to give credence to the pearl clutching casual sexism and racism that the anti-camp is spewing.  I am here to celebrate the talent, intelligence and courage exhibited by these powerhouse performers.  It was clear that both JLo and Shakira, along with their respective teams, saw this slot not only as a chance to give the performance of a lifetime, but as an opportunity to leverage a platform to speak truth to power, and to send multitude of messages to the multitudes of people watching around the world.

A Lesson in culture

I have been a longtime Shakira fan, diving deep into her Spanish and occasional Arabic language catalogue before she broke the language barrier in North America and began releasing her songs in English.  It was that combination of Latinx Arab influence, in her music, in her imagery and in her dancing that drew me to Shakira as an artist, and kept me hooked even after she gained mainstream popularity (that’s normally where I jump ship).  I wondered if she would stick with those English tunes on the Super Bowl stage, and to my delight she did not.  Instead of playing it safe, Shakira took the chance to showcase what it means to be an artist and performer with Latin and Arab roots to a massive audience, many of whom were never exposed to such forms of cultural artistry.  Combining the beautiful bellydance of her Lebanese heritage, to the champeta, the mapalé and African inspired movement of her native Columbia, Shakira created an unforgettable work of live performance art that paid tribute not only to her diverse background, but to the city of Miami where the Super Bowl took place, and to the marginalized and vilified Latinx and Middle Eastern populations of the United States.

While Shakira was out there reminding the audience of the power possessed by women of color, JLo lit up like a star in sky to remind the world of the power of women at every age, while also giving a master class on combining art and activism.  As the political race ramps up and cages crop up in Iowa to remind Americans of what their president has done, JLo took that same messaging to her halftime show, reaching exponentially more people in the process.  After dazzling with a medley of her classic JLo goodness, including SINGING WHILE POLEDANCING (let’s see even the best football player try that), JLo’s daughter Emme took the stage, launching into a poignant rendition of “Let’s get loud” seemingly while encased in a glowing cage.  The message becomes clear as the camera pulls back to show a sea of caged children, a stark reminder of the border crisis that the mainstream media and the American pubic would rather forget.  With the audience still reeling from the monstrous metaphor, JLo strode back onstage enrobed in a huge American flag, only to open it up to reveal the flag of her native Puerto Rico in a fashionable fuck-you to a government that seems all too happy to forget about the territory’s existence especially when its people are in need.

Growing up as a curvy Egyptian girl in one of the whitest neighborhoods in Toronto, in a media landscape that highlights whiteness above all else, it was hard to find role models that I could relate to that looked anything like me, especially as a rock music loving teenager.  So on a personal note, to see Shakira on that stage positively shredding on a super blinged out Gibson Firebird guitar (encrusted with 70,000 Swarovski jet hematite crystals) brought joy to both my adult self and my inner teenager. 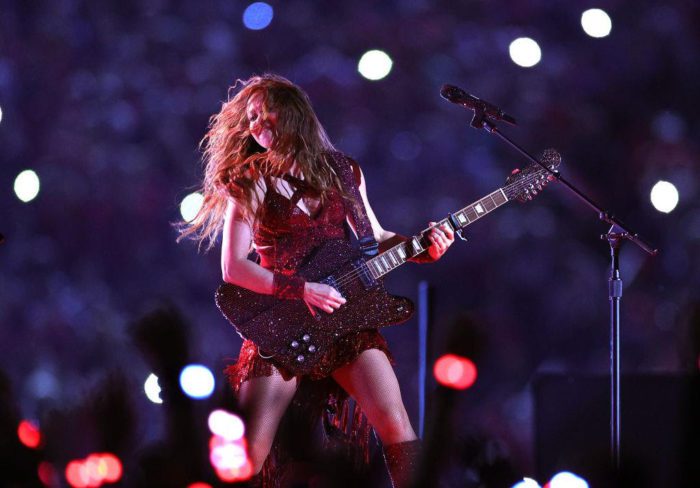 What’s perhaps the most ironic piece of criticism about this performance is that JLo and Shakira failed as role models for young women, when from where I’m sitting, they succeeded with flying colors.  The Super Bowl Half Time show is a massive opportunity for any artist from any background or genre to showcase their art and talent.  But to do what these women did, to use that platform to criticize the establishment, to highlight the suffering inflicted by harsh government policies, and to honor often maligned cultural groups, is sadly rare and incredibly necessary.  Shakira and JLo delivered that powerful political messaging while also showing the world what women over the age of 40 (and in JLo’s case, 50) can do, when the world would rather them be invisible.  Body positivity, anti-ageism, inclusivity, diversity, and using your powers for good; if that’s not role model level shit, I don’t know what is.

Watch this feat of physical prowess and talent for yourself here (and no, I’m not talking about highlights from the football game).